This sample Feminism, First, Second, and Third Waves Essay is published for informational purposes only. Free essays and research papers, are not written by our writers, they are contributed by users, so we are not responsible for the content of this free sample paper. If you want to buy a high quality essay at affordable price please use our custom essay writing service.

The women’s movement in the USA is generally broken into waves of protest, each set in different time periods with diverse tactics, ideologies, and goals. The waves are divided into a first wave, starting in the 1840s; a second wave, beginning in the late 1960s; and the third wave, emerging in the mid-1990s. Each wave is characterized by a period of mass mobilization when women of different backgrounds united on common issues, followed by periods of fragmentation, when women searched for ways to acknowledge their differences and to work on a variety of issues, including those pertaining to race/ethnicity, class, and sexual identity. Studies of the first wave tend to focus on the structural and organizational aspects of the movement. Therefore scholarship on the first wave investigates the organizations that emerged, activists’ and organizations’ relations with the political environment, and the larger social climate (e.g., demographic shifts). While these aspects continue to define the second and third waves of the movement, scholars also incorporate more cultural analyses to capture how individuals act politically, the role of identity and community, and multiplicity of oppression. 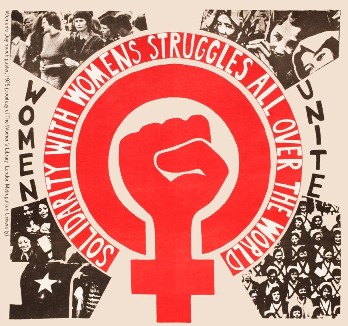 The first wave of the US women’s movement emerged in a time of great social change due to industrialization, national expansion, and a public discussion on individuals’ rights. The issue of slavery drew many women into the public sphere and in the early 1800s, women were instrumental in organizing and participating in the Abolition Movement. When denied the right to speak and visibly participate at anti-slavery and temperance conventions, women reformers organized the first women’s rights convention. The Seneca Falls Women’s Rights Convention, held July 14, 1848, was organized by abolitionists Lucretia Mott and Elizabeth Cady Stanton and focused on multiple issues, including education rights, property reforms, and women’s restrictive roles within the family. The convention attendees drew up a Declaration of Sentiments, modeled after the Declaration of Independence, which detailed how men had denied women their rights. It was only after much deliberation that the 300 attendees decided also to address the controversial issue of women’s suffrage.

The first wave of the movement has been characterized as seeking national-level policy and legislative change, populated mostly by white upper- and middle-class women within organizational contexts, and subject to factions, divisiveness, and dwindling mobilization after the suffrage victory. By the 1950s, despite the traditional images of women, more and more middle-class white women were entering the labor force, and single motherhood and divorce rates were beginning to rise. The strain between societal expectations of domesticity and women’s experiences in education and the workforce, along with other factors such as the rise of the cycle of new social movements that swept the United States and Western Europe, led to the reemergence of the movement in the 1960s and 1970s.

The emergence of the second wave drew on activist networks from the first wave as well as other movements, particularly the New Left and the Civil Rights Movement. In addition, the publication of books such as Simone de Beauvoir’s The Second Sex in 1952 and Betty Friedan’s The Feminine Mystique in 1962 sparked primarily white middle-class women’s dissatisfaction with the roles of men and women.

From the years 1972 to 1982, the second wave was in what has been characterized as its heyday. Women’s liberation groups continued to recruit women to feminism and caused cultural shock waves with their critiques of femininity, gender roles, and heterosexuality. In the meantime, women’s rights groups won legislative victories with the 1972 passage of Title IX directed at ending sex discrimination in publicly funded education and the 1973 Roe v. Wade decision by the Supreme Court legalizing abortion. One result of this heightened activity in the United States and abroad was that in 1975 the United Nations sponsored the First International Conference on Women in Mexico City.

Although these years were times of success for feminists, it was also a period of conflict, fragmentation, and growing discord in the movement. Lesbians, working-class women, and women of color critiqued white middle-class women’s control of both branches of the movement. Informed by the discord in the first and second waves, feminists and feminist scholars, such as the Combahee River Collective and, later, Patricia Hill Collins, conceptualized an intersectional feminist paradigm that views race/ethnicity, class, gender, and sexuality as interlocking systems of oppression, forming a ”matrix of domination.”

The popular media and some political pundits have repeatedly declared feminism dead or in decline. Scholars and activists respond to these obituaries in different ways. Some argue that these ”premature” death notices serve a larger goal, preserving the status quo by erasing women’s activism. Some argue that feminism diffused into the larger culture, bringing about a ”post-feminist” era where feminist goals and ideology are alive but submerged into the broader culture. Others view the movement as fragmented, particularly because of issues of homophobia, classism, and racism, yet insist that it still remains active and vital. Related to this view, others argue that feminism has changed form and is now done in a different way by a new generation of activists.

Adopting the view that the movement has changed form and tactics, some scholars and participants refer to this phase of the women’s movement as ”the third wave.” The idea of a third wave comes from the concept of a political generation, a period when common historical experiences form a political frame of reference for a group. Young women and men in the twenty-first century enter into feminism in a society dramatically shaped by the movement’s first two waves. In addition, feminism is embedded in the institutions in which third wave feminists spend their lives. Their families, schools, health-care providers, and political representatives have been influenced by the beliefs and values of first and second wave feminism.