This sample Feminism Essay is published for informational and educational purposes only. Free essays and research papers, are not written by our writers, they are contributed by users, so we are not responsible for the content of this free sample paper. If you want to buy a high quality essay at affordable price please use our custom essay writing service.

The term feminism, deriving from its mid-nineteenth century French origins in feministe, refers most basically to an ideological commitment to the social, economic, and political equality of men and women within nations and across the globe. Feminism entails a way of critically engaging with the world from a perspective grounded in sex, gender, and sexuality to advance freedom, equality, and inclusion for women as full citizens with the right to determine their life paths. Two identifiable periods of feminism, often referred to as the first and second waves, track democracy’s political trajectory beginning with women’s ongoing struggle for equal rights in the nineteenth- and early-twentieth-century suffrage movements and moving into claims related to sexual liberation, employment, education, and the family from the early 1960s until today. This highly contested term encompasses diverse schools of thought emanating from multiple identities and standpoints that reflect how feminism transforms the political arena by interjecting an understanding of its subjects as gendered, sexed, and sexual human beings. Feminism, in all its rich complexity, then conveys a theoretical vision requiring direct action to address the oppression of women that has changed the meaning of politics by identifying and challenging the boundaries of public and private life in two key ways. 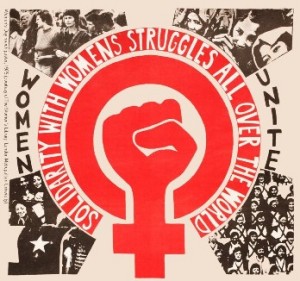 First, formal recognition as citizens marks the initial break through the barrier to women’s participation in formal politics associated with the first wave of feminism. Between the late 1700s and the early 1900s, broader claims to equal rights narrowed into the right to vote. The resulting suffrage movements grew out of the revolutionary periods in France, Britain, Germany, and the United States during the late eighteenth century. Olympe de Gouge (b. 1748), in the midst of the French Revolution (1789–1799), vehemently proclaimed women’s equal rights in her Declaration of the Rights of Woman and the Citizen (1791), which resulted in Maximilien Robespierre’s putting her to death by guillotine in 1793. In the United States, Elizabeth Cady Stanton (1815–1902) modeled the Declaration of Sentiments (1848) on the Declaration of Independence (1776), which justified the American colonists’ revolution against Great Britain. Women first broke into the formal political realm in New Zealand, the first country to grant women unrestricted voting rights in 1893. British women won suffrage in 1918, the United States in 1920, and the French, a late European arrival, in 1944. Voting rights now extend to most women across the globe, with the exceptions of those in Bhutan, Brunei, and Saudi Arabia, indicating a dramatic redrafting of who participates in public life.

In addition, the fight for formal recognition evolved into women’s push for representation as elected politicians. Widow’s succession, the process of a woman’s assuming her husband or father’s office after his death, served as the primary way in which women entered public office. Sirimavo Bandaranai (1916–2000) of Sri Lanka became the world’s first female prime minister in 1960 when she ran as the Sri Lankan Freedom Party’s candidate after her husband’s assassination. She won office in her own right in 1970. Prominent female heads of state such as Indira Gandhi (1917–1984), Indian prime minister from 1966 to 1977, and Golda Meir (1898–1978), Israel’s prime minister from 1969 to 1974, indicate how women increasingly acquired leadership positions by winning elective offices with greater levels of political power. Women now hold 16 percent of the seats in legislative bodies worldwide; that, coupled with voting rights, signals how feminism transformed the public sphere by securing greater inclusion of female citizens and representatives on a global scale.

Second, feminism expanded its focus on the formal political arena to include jobs, education, the family, and reproductive freedom as part of a growing awareness that the private sphere shapes both the public and women and men’s role in it. Simone de Beauvoir’s The Second Sex (1949) catalyzed the second wave, which, unlike the first, aimed to liberate women from their biologically determined sex roles as mothers and wives. Second-wave feminists responded to the two-pronged struggle for equal rights and liberation in diverse ways indicated by the schools of thought—ranging from liberal, radical, socialist, Marxist, lesbian, and black to cultural, psychoanalytic, and postmodern—that contributed greatly to building contemporary feminism’s theoretical foundation. The slogan “the personal is political” broadly conveys the key shift in this period when women awakened to their oppression as women in the classroom, the boardroom, and even the bedroom. Issues conventionally classified as personal, or belonging to the private, such as birth control, abortion, marital and date rape, sexual harassment, and domestic violence became legislative and policy-making matters. The U.S. Supreme Court’s decision in Roe v. Wade (1973) granting women the legal right to an abortion propelled reproductive rights, conventionally relegated to the private sphere, into the center of American politics. As a result, the backlash against feminism formed, first taking shape in the Moral Majority established in 1975, which morphed into the Christian Right, ushering in an era of social conservatism lasting into the twenty-first century.

Globalization combines with democratization to reveal other fault lines that stake out the contemporary political terrain of feminism. At the International Women’s Year gathering held in Mexico City in 1975, Mexican feminists convened a countercongress to highlight the diversity of women’s issues and their rejection of first world women’s claims to represent all women. This event spotlights a division between women in the global North and South working to advance feminism. Third world, global, and transnational feminisms, in response, challenge the Western imperialist and colonial legacy of feminism that perpetuates the exclusion of women from different castes, classes, and colors and provide alternative visions for a global feminist movement. Given its role in redrawing public and private life and the identity of political subjects, feminism remains a site where the politics of gender, sex, and sexuality will be negotiated around issues such as human trafficking, surrogacy, gay marriage, and HIV/AIDS and provides a lens critical for analyzing the complex dynamics of power in and between political communities and their citizens.