This sample Discrimination Essay is published for informational and educational purposes only. Free essays and research papers, are not written by our writers, they are contributed by users, so we are not responsible for the content of this free sample paper. If you want to buy a high quality essay at affordable price please use our custom essay writing service.

Discrimination, in its modern usage, means treating someone unfairly or unfavorably and denying individuals or groups of people equality of treatment. International labor organizations; the United Nations Educational, Scientific and Cultural Organization; and various United Nations (UN) treaties define discrimination as any distinction, exclusion, or restriction of preference based on race, color, descent, or national or ethnic origin that has the purpose or effect of nullifying or impairing the recognition, enjoyment, or exercise, on an equal footing, of human rights and fundamental freedoms in the political, economic, social, cultural, or any other field of public life.

Discriminatory practices are those detrimental distinctions that do not take account of the particular characteristics of an individual as such but instead consider only collective qualifications deriving from membership in a certain social or other group such as race, color, religion, or gender. Four forms of discrimination include inequality in treatment, imposing disabilities, granting privileges, and imposing obligations. Discrimination as denial of equality has many faces, including denial of economic opportunities, power, status, access to education, and career opportunities. All of these are naturally reinforcing. People can suffer discrimination at work, school, or college or while shopping, looking for accommodations, participating in public activities, or dealing with authorities.

UN Special Rapporteur Elizabeth Odio Benito notes in her work that manifestations of discrimination, intolerance, and oppression sometimes occur in isolation and sometimes in combination. Michel Banton points out that experimental research in social psychology has established that even meaningless information suggesting that some individuals constitute a group can be sufficient to initiate processes of group inclusion or exclusion. Discrimination, thus, also occurs without anyone intending to discriminate. The international convention therefore defines discrimination as any action or inaction that has either a discriminatory purpose or a discriminatory effect. It is generally believed that since 1949, de jure discrimination has been abolished in most parts of the world. However, the practice continues in most parts of the world, most frequently in the form of racism. 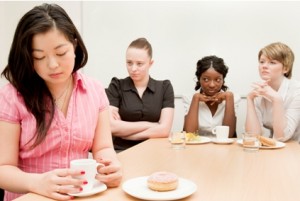 Racism is the combination of the power of one race to dominate other races and a value system that assumes that the dominant race is innately superior. Race is an arbitrary and therefore problematic term employed in the classification of human beings on the basis of appearance, and it is a primary determinant of human traits and capacities. Thinking that differences are hereditary and unalterable, one ethnic group or historical collectivity dominates, excludes, or seeks to eliminate another. Its varied usages have resulted in race being seen as an objective biological fact and/or a social fact that operates through independent characteristics. According to studies by geneticists and biologists, racism has no scientific basis.

Racial discrimination operates in different forms and at different levels. It can be overt or covert, personal or institutional. Personal racisms are manifested through the individual expression, attitudes, or behaviors that accept the assumptions of a racist value system. Institutional racism is the established social pattern supported by policies, rules, and regulation that support implicitly or explicitly the racial value system. For example, in many societies, commitment to and investment in the health and welfare of different groups of people is quite disparate. There are also cases of social exclusion and isolation of minority and indigenous groups from access to economic resources and social and political processes.

One regime that continued institutional racism after 1949 was that of South Africa, with its use of apartheid. Apartheid was introduced in 1948 by the National Party as a system of social segregations designed to maintain a situation of inequality between whites and the other ethnic and social groups in economic, social, political, and cultural spheres. This ended in 1993.

The practice of racial discrimination continues in many parts of the world in a covert manner, more at personal and social levels than by the state, although in many cases discrimination by the state is also visible. It has been observed that victims are no longer discriminated against in the name of biological inferiority, but instead they are discriminated against socially because of religious or cultural traditions. Racial distinctions have been incorporated into a system of social class distinctions. It is also alleged that in some states, because of historical aspects, economic tensions due to migrations, and alleged terrorist activities, racism is present in various subtle forms. It continually assumes new forms, intensified by conflict over economic resources in developed as well as in developing countries. According to some observers, the process of globalization has also contributed in the resurgence of racial discrimination in some regions.

Elizabeth Benito (1989) quotes Gordon Allport, who argues that deviation in creed alone does not account for the persecution. The discrimination is not caused by the doctrines or teachings of religions. Instead, he argues that there is usually a political or historical reason or a stereotype that fosters religious persecution. Religious intolerance thus occurs when religion and prejudice are merged. Persecution occurs when countries, governments, and individuals use or attack religion to justify the pursuit of power, prestige, wealth, or ethnic self-interest. In many cases, the compulsions to create a national identity and pursue a collective destiny have been murderously homogenizing, with religion playing a crucial violent role. Charges of religious discrimination have been made even against liberal, secular, and democratic states, including countries in the Western developed world.

Another common basis for discrimination throughout history has been gender. The International Convention on the Elimination of All Forms of Discrimination against Women (1979) defines it as

any distinction, exclusion or restriction made on the basis of which has the effect or purpose of impairing or nullifying the recognition, enjoyment or exercise by women, irrespective of their marital status, on a basis of equality of men and women, of human rights and fundamental freedoms in the political, economic, social, cultural, civil, or any other field.

Gender discrimination exists in families, in communities, and in the workplace and can take many different forms. The treatment accorded to women in terms of property rights, rights of inheritance, laws related to marriage and divorce, rights to acquire nationality, and the right to seek employment reflects discrimination both in law and in fact. Many women face additional discrimination and denial of equality because of their race, language, ethnicity, culture, religion, or socioeconomic class. They, thus, suffer compounding affects of discrimination.

Other Forms Of Discrimination

In addition to the above well-defined groups, people also face discrimination, particularly in employment, on the basis of language, age, and disability. Gays and lesbians are discriminated against socially and in the workplace because of their sexual orientation. In the present era of globalization in which the global economy has stimulated high levels of migration, complaints of discrimination against immigrants and asylum seekers have also become common. Discriminating police behavior and visible ghettoization characterize many metropolitan cities of Europe and North America.

Concerns about discrimination have been expressed by the international community at various levels, and efforts are ongoing to eliminate it. Particularly since the adoption of Universal Declaration of Human Rights in 1948, the international community has made important strides in the flight against racism. Beginning with the Convention on the Prevention and Punishment of the Crime of Genocide (1948), the UN has adopted a series of conventions and declarations, proclaimed an International Year of Mobilization against Racism (2001), and organized three decades against racism (1973–1982, 1983– 1992, 1994–2003) along with two world conferences on the same theme (1978 and 1983). The World Conference against Racism, Racial Discrimination, Xenophobia and Related Intolerance held in Durban (South Africa) from August 31 to September 7, 2001, debated an array of questions reflecting the complex interplay of prejudice and intolerance: political, social, and economic exclusion; migration; human trafficking; and indigenous peoples’ and minority rights.

A number of states have also incorporated provisions for equality and prohibitions against discrimination in their constitutions. Steps have also been taken for reparations, which include the concept of reverse discrimination. This concept refers to current discriminatory policies or acts that benefit a group that has historically been discriminated against, generally by giving preferences to that group, or discriminating against individuals not in that group or against dominant groups. It is now well recognized that discrimination not only denies groups of human beings dignified existence, marginalizes productive individuals and groups, and depresses their creativity and initiative, it also is a negative manifestation of integrative power. Instead of bringing or holding people together, prejudice and discrimination push them apart. Those discriminated against may find society or the state responsible for the disparities in their lives and may join militant, extremist, or fundamentalists forces justifying even terrorism.