This sample Vietnam War Essay is published for informational purposes only. Free essays and research papers, are not written by our writers, they are contributed by users, so we are not responsible for the content of this free sample paper. If you want to buy a high quality essay at affordable price please use our custom essay writing service.

The Vietnam War was America’s longest war. In total, the conflict in Vietnam lasted from 1946 to 1975. The official dates of U.S. involvement were 1964–73. The Vietnam War was extremely costly and destructive and had a profound effect on both the soldiers who fought it and the civilians who lived through it. The Tonkin Gulf Resolution was signed by Lyndon B. Johnson in 1964 and gave him the power to wage war in Vietnam.

Throughout the 1940s and into the 1950s, the Vietminh under ho chi minh were fighting the French colonial presence in Vietnam. By 1954 the United States was paying 80 percent of the cost of France’s war against the Vietminh. In July 1954 the French and the Vietminh signed an armistice in Geneva, which divided Vietnam at the 17th parallel. Ho Chi Minh controlled the north, and Vietnam-wide elections were to be held in 1956. The United States did not sign the agreement, and plans were put in place to stop Ho Chi Minh’s plans to conquer all of Vietnam. President Dwight Eisenhower was afraid that if Vietnam fell to communism, the rest of Southeast Asia would follow.

Not wanting Vietnam to be under the control of a communist leader, the United States pushed aside the French puppet leader and replaced him with ngo dinh diem, a Vietnamese nationalist. Many were confident that Diem could rally Vietnam against communism. The United States increased aid to South Vietnam, and the first U.S. advisers arrived there in early 1955. These decisions laid the groundwork for the Vietnam War.

Ho Chi Minh was frustrated that Vietnam was not yet independent and unified, so in 1957 the Vietminh in South Vietnam began to revolt against the Diem regime. In May 1959 communist North Vietnam came to the aid of the revolutionaries in the south. As a result, the United States increased its aid to South Vietnam. 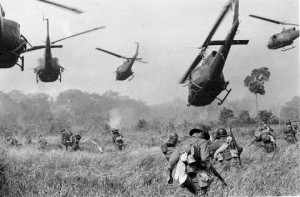 In South Vietnam conditions deteriorated rapidly. Diem’s regime never gained popular support. In 1960 anti-Diem communists and Buddhists created the National Liberation Front, with the Vietcong as its military wing, and began operations against Diem’s forces. The United States had pledged in the 1954 south east asia treaty organization pact to defend South Vietnam against external aggression, and President john f. kennedy lived up to that obligation.

To Kennedy and other politicians, Vietnam was another cold war battlefield. Signs of weakness would lead the Soviet Union to believe that the United States was weak and vulnerable. As such, South Vietnam also became a testing facility for counterinsurgency units. The U.S. Green Berets advised the South Vietnamese army, and civilians provided medical and technical aid and economic and political reforms, all in an effort to “win the hearts and minds” of the Vietnamese.

There was a general consensus in Kennedy’s administration about the consequences of losing Vietnam to communism; there were others who feared the worst. Undersecretary of State George Ball told Kennedy that within five years there would be 300,000 U.S. soldiers in Vietnam. However, Ball was incorrect: within five years nearly 400,000 soldiers were in Vietnam.

Even with his advisers calling for escalation, Kennedy proceeded cautiously. By the middle of 1962 he had increased the number of military advisers from 700 to 12,000. He added another 5,000 in 1963. As the number of casualties increased, the prospects of withdrawing became increasingly difficult. In the face of so many problems, Kennedy gave the order to overthrow Diem. On November 1, South Vietnamese military officials, with the assistance of the U.S. embassy in Saigon, arrested Diem and his brother. While in custody, both were assassinated. However, the plan backfired. A number of inexperienced military officers took command in South Vietnam with little support and were unable to govern effectively. The country sank deeper into trouble and the role of the United States increased.

After President Kennedy was assassinated on November 22, 1963, the issue of Vietnam fell to President lyndon b. johnson; Johnson was deeply troubled over Vietnam and had been for some time. During the rest of the months leading up to the November 1964 election, Johnson tried all he could to keep the issue of Vietnam in the background, fearing it would hurt his chances of being elected. In many of his conversations with Robert McNamara, secretary of defense, Johnson discussed doing all he could to keep the public thinking that he had made no final decisions on Vietnam. Some advisers were trying to give Johnson suggestions for getting out of Vietnam and still saving face; meanwhile, the Joint Chiefs of Staff were advising him that preventing the loss of South Vietnam was of overriding importance to the United States.

Robert McNamara visited Saigon. He reported to Johnson that conditions had worsened there since General Khanh took over power in January 1964. Many officials there favored increased pressure on North Vietnam, including air strikes. McNamara, aware of Johnson’s wish to be ambiguous to the public regarding his stance, offered to take a lot of the heat. Johnson, knowing the conditions in Vietnam, understood that in order to achieve the ambitious conditions set out in McNamara’s policy statement, an escalation of military power in the country would have to be undertaken.

The Gulf of Tonkin Resolution was passed in Congress on August 7, 1964. It provided the legal authority for Johnson to escalate the Vietnam War. On August 2 North Vietnamese gunboats had attacked the USS Maddox in the Gulf of Tonkin. On August 4 the Maddox and another vessel, the USS Turner Joy, reported being under attack. Many doubts exist about whether or not the second attack actually took place, but the Johnson administration used it as a pretext for retaliation. Johnson ordered the first U.S. air strikes against North Vietnam. The resolution was passed 88-2.

Johnson won the 1964 presidential election by a landslide. In addition to his domestic agenda, the great society, Vietnam was the largest issue he dealt with. Still relying on trusted advisers like Richard Russell, even though he would not take his advice, Johnson had countless discussions about Vietnam. Johnson’s rationalization was what he considered a treaty commitment inherited from Eisenhower and Kennedy. No matter what Johnson said to him, Russell stuck to his conviction that Vietnam was not the place to invest U.S. blood and treasure. Johnson told Everett Dirksen, Senate minority leader, that communist propaganda, his advice from Eisenhower, and the domino theory informed his policies with regard to Vietnam.

After July 1965 the war escalated into a major international conflict. The North Vietnamese army numbered in the thousands, and they supported an estimated National Liberation Front force of 80,000. From 6,000 U.S. troops in Vietnam in July 1965, the number increased to over 536,000 by 1968, with an additional 800,000 South Vietnamese troops. Both sides played to their own strengths. The United States had great wealth, modern weapons, and a highly trained military force under the command of General William Westmoreland. Using bombing raids and search-and-destroy missions, it sought to force the opponent to surrender.

The National Liberation Front and the North Vietnamese army, under the exceptional direction of vo nguyen giap, used a different strategy altogether. They were lightly armed and knew the area. They relied on the guerrilla warfare tactics of stealth and mobility. Giap wanted to wear down the United States and its allies by harassment missions.

Between 1965 and 1967 the United States did untold amounts of damage to Vietnam. Bombing increased from 63,000 tons in 1965 to over 226,000 tons in 1967. The U.S. military strategy failed to produce clear results. The war dragged on, and opposition to the conflict in the United States intensified. Countless protests took place in cities and on college campuses. Troops who returned home were often treated poorly, quite the opposite of the heroes’ welcome experienced by returning veterans of World War II.

The Tet Offensive of 1968 brought a new phase of the war. In late 1967 the North Vietnamese launched operations in remote areas to draw U.S. forces away from cities. On January 31, 1968, the National Liberation Front launched massive attacks on the unsecured urban areas. They led strikes on 36 provincial capitals, 5 major cities in the south, and 64 district capitals. They also attacked the U.S. embassy in Saigon and captured Hue for a period. Although the Tet Offensive failed overall, it had a profound psychological effect on the people of the United States. Protests increased, and murmurs that the war was unwinnable became much more audible. As a result of developments in Vietnam and widespread unrest across the country, Lyndon Johnson announced that he would not seek reelection in 1968.

After the Tet Offensive, ensuing peace talks failed to produce any agreement. The problem of Vietnam fell to the fourth U.S. president involved in the Vietnam conflict, richard nixon. In 1969 he expanded the war into neighboring Cambodia, a move that he kept from the press, further increasing the gap in the people’s trust in the government when he went public about the decision in 1970. The domestic backlash led to a new wave of protests, during which four students died at Kent State University in Ohio, and two more at Jackson State University in Mississippi.

Nixon’s involvement in Vietnam was marked by increased domestic opposition. After the Cambodian affair, Congress repealed the Tonkin Gulf Resolution. The trial of Lieutenant William Calley, commander of a unit that murdered 500 South Vietnamese civilians at My Lai, raised fundamental moral questions about the war. Finally, the Pentagon Papers were published in 1971, which deepened public distrust in the government. Polls showed that more than 70 percent of Americans felt that the United States had erred when it sent troops into Vietnam. During 1972–73 the U.S. phase of the war ended.

A peace agreement was signed in Paris on January 27, 1973. It allowed for the extraction of U.S. military forces from Vietnam and the return of U.S. prisoners of war but did not address the fundamental issues over which the war had been fought. North Vietnam was allowed to leave 150,000 troops in the south, and the future of South Vietnam was not directly and clearly spelled out. Fighting broke out between the north and the south, and the U.S. Congress drastically cut military and economic aid to South Vietnam.

When Richard Nixon resigned because of the watergate scandal, the Vietnam War issue was passed to its fifth president, gerald ford. Congress rejected his request for $722 million in aid for South Vietnam, agreeing to only $300 million in emergency aid to extract the remaining U.S. personnel from the south. The climax of this came on May 1, 1975, with a harrowing rooftop helicopter evacuation.

The total cost of the war was extensive. South Vietnamese military casualties exceeded 350,000, and estimates of North Vietnamese losses range between 500,000 and 1 million. Civilian deaths cannot be accurately counted but ran into the millions. More than 58,000 U.S. troops were killed, and over 300,000 were injured. The total financial cost of the war exceeded $167 billion.

Many of Johnson’s Great Society reforms were cut back because of the increased military expenditures. Veterans returning home experienced long-lasting effects, which ranged from flashbacks to posttraumatic stress disorder to the effects of exposure to chemicals. Furthermore, the war saw no tangible results. Once the United States evacuated Saigon, the north overran the city, and Vietnam was united under communist rule.