This sample Spanish-American War Essay is published for informational purposes only. Free essays and research papers, are not written by our writers, they are contributed by users, so we are not responsible for the content of this free sample paper. If you want to buy a high quality essay at affordable price please use our custom essay writing service.

In 1898, in a war marking the emergence of the United States as a major imperial power, the United States wrested from Spain its remaining colonies in the Caribbean and Pacific: Cuba, Puerto Rico, Guam, and the Philippines. The short-term trigger of the war was the events in Cuba, with the Cuban revolutionaries on the verge of defeating the Spaniards and achieving outright independence. The sensationalist “yellow journalism” of the Hearst newspapers, which popularized the perception that the Spaniards were inhuman brutes committing atrocities against the childlike Cubans, had played a key role in laying the groundwork for U.S. intervention in Cuba.

The explosion aboard the U.S. battleship Maine in Havana Harbor on February 15, 1898, which killed more than 260 people, provided the casus belli that the United States had sought. On April 25 the U.S. Congress, at President William McKinley’s request, declared war on Spain. Historians generally agree that the longer- term causes of the war were rooted in the previous eight decades of U.S. interest in acquiring Cuba; the late 19th-century process of European empire-building in Asia and Africa, which heightened U.S. policymakers’ desire to compete with European powers for markets and territory; and the desire of political leaders to distract the nation’s attention from pressing domestic issues, including a severe economic depression and an upsurge in labor and popular unrest. More recent scholarship also emphasizes the desire of a new generation of political leaders, epitomized by McKinley’s assistant secretary of the navy Theodore Roosevelt, to prove their “manliness” by going to war, as their predecessors had done in the U.S. Civil War.

Called the “splendid little war” by U.S. Secretary of State John Hay, the war with Spain began in April and was concluded in August. Altogether, some 5,660 U.S. military personnel died in the war—460 in battle or of wounds suffered in battle, and 5,200 from disease. Casualties among Spaniards, Cubans (in their war of independence), and Filipinos were much higher. At the same time as U.S. forces were invading Cuba, another contingent occupied Puerto Rico; the U.S. military ruled Puerto Rico until the Foraker Act of 1900, which ended military rule and set up a colonial administration. Puerto Rico became a U.S. territory in 1917 with the Jones Act, a law that also made Puerto Ricans U.S. citizens. 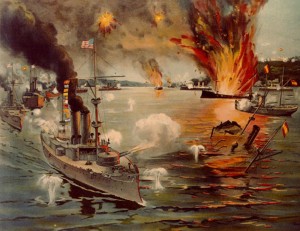 In the Pacific, the U.S. quickly defeated Spanish forces in the Philippines, though “pacifying” the colony proved far more difficult. On May 1, 1898, the fleet of U.S. Commodore George Dewey entered Manila Bay and destroyed the Spanish fleet anchored there; U.S. forces occupied the capital city of Manila in July. Soon afterward, a nationalist resistance movement against the U.S. occupation erupted under the leadership of Emilio Aguinaldo. The war against Aguinaldo’s forces lasted nearly four years, involved some 200,000 U.S. troops, and resulted in the deaths of more than 50,000 Filipinos. In March 1901 U.S. forces captured Aguinaldo, severely weakening the resistance movement, and by 1906, U.S. forces had triumphed.

The Spanish-American War formally ended in December 1898 with the Treaty of Paris, which granted the United States formal control of Cuba, Puerto Rico, Guam, and the Philippines, in exchange for $20 million. In the United States, debates swirled about the terms of the treaty and the fate of the conquered territories. Some favored annexation, others independence, and still others various forms of formal and informal colonization. After much debate, the U.S. Senate ratified the Treaty of Paris on February 6, 1899. The precise nature of U.S. rule that emerged in later years changed over time and varied from territory to territory, as evidenced by the formal independence of Cuba in 1902 (with the United States retaining control of Guantanamo and limiting the Cuban government’s right to conduct an independent foreign policy, by the terms of the 1901 Platt Amendment), the formal independence of the Philippines in 1946, and the contemporary commonwealth status of Puerto Rico and Guam.