This sample Protestant Reformation Essay is published for informational purposes only. Free essays and research papers, are not written by our writers, they are contributed by users, so we are not responsible for the content of this free sample paper. If you want to buy a high quality essay at affordable price please use our custom essay writing service.

In the 16th-century Reformation, spiritual traditions gave way to scientific views on religion, society, and philosophy. Europe witnessed a fermenting of great ideas stimulated by the Renaissance. A new urban middle class ascended, with its Protestant ethics of capital accumulation, and the old order of Europe changed. The Reformation had far-reaching consequences for the church, society, and the economy.

Humanism in Europe changed intellectual inquiry beginning in 1400 by encouraging people to think in terms of reason instead of faith. Medieval Christianity was becoming outdated and human interests began to predominate. The concept of chance rather than Providence became the hallmark of the age of Renaissance humanism.

The affairs of the secular world rather than of the divine world became primary. Among the thinkers of this era were Desiderius Erasmus of Rotterdam (1466–1536), Niccolo Machiavelli (1469–1527), Francesco Guicciardini (1483–1540), Rudolphus Agricola (1443–85), and John Colet (ca. 1467–1519). The printing industry played an important role in educating people. Knowledge was disseminated at a faster rate after the invention of the printing press by Johann Gutenberg (1397–1468). 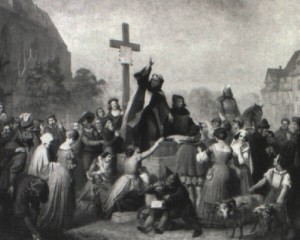 In the political arena, the decay of the Holy Roman Empire and the development of central governments had a profound effect on the feudal order, which changed with the rise of a new middle class. The geographical discoveries made by explorers altered European understanding of the world and led to a vast extension of commerce. The traditional wealth of landholdings found a rival in commercial wealth. The time was ripe for a careful reexamination and reconstruction of old institutions and the greatest one, the Roman Catholic Church, was no exception.

The Roman Catholic Church was marked by abuses and widespread corruption. The papacy had been discredited by immoral Alexander VI and the warlike Julius II. Desire for worldly possessions and political power became the norm for clergy. The sinecures, selling of indulgences, and pluralism further discredited the church. Independent nations did not like the interference from an external sovereign like the pope and sought ecclesiastical independence. The pioneering reform movements against the church began with John Wycliffe (1320–84), who was declared a heretic. He advocated freedom of individual conscience. Another reformer, John Huss (1317–1415) from the University of Prague, translated Wyclif’s works into Czech, was condemned by the Council of Constance (1414–18), and was executed. Girolamo Savonarola (1452–98) endeavored to effect moral reformation in Florence and was also slain. Erasmus of the Netherlands, professor of divinity at Cambridge in 1511–13, lampooned the papacy and the monasteries.

The onset of the 16th century witnessed debate over religious reforms, and from the second decade, the undisputed leader of the Reformation was Martin Luther (1483–1546), whose posting of the 95 Theses on the door of the Wittenberg castle church on October 31, 1517, challenged papal abuses and sale of indulgences. The princes supporting Luther hoped that his actions would undermine Rome’s authority over Germany. Luther did not believe that purchasing indulgences would spare a soul from purgatory, and he did not believe that a person could be saved by his own deeds. He protested the rituals of the church, emphasizing that sacraments were essential for salvation. For him, it was God’s mercy that allowed for salvation, not institutions and sacraments. The printing press spread the message of Luther quickly, and his ideas created havoc in Europe.

The placid Pope Leo X (1513–21) sought a solution to the problem of the Reformation and called Luther to present his case after excommunicating him in 1520. Luther began his journey to Worms on April 2, 1521, and was welcomed in towns that he passed through. The church and the powerful Holy Roman Emperor, Charles V (r. 1519–56), a supporter of the Roman Catholic Church, wanted Luther to retract his statements. At the Imperial Diet of Worms, Luther stood firm in his belief and proclaimed that he could not submit his faith either to the pope or to the council, and his conscience was submissive to God’s will alone. He was allowed to go home and lead a life of seclusion, writing against the papacy.

Luther had been declared an outlaw but was comparatively safe because the Emperor was busy at war with France. The Diet did not remedy the ecclesiastical grievances, and Luther’s spiritual rebellion gave rise to political rebellion in the form of the Peasants’ War of 1524 and 1525. Thomas Muntzer, a former Lutheran cleric, led the revolt, in which peasants demanded reforms of feudal excesses. Luther’s call for peace went unheeded and he sided with the princes. The ruling prince of each principality decided the type of Christianity that would be followed; the southern princes generally sided with Rome, whereas the northerners were loyal to Lutheran teachings. At the Diet of Speyer in 1526, each German state was allowed to choose between the two religions. But after three years, in the second Diet, there was reenactment of the Edict of Worms and the Lutherans protested, thus gaining the name of Protestants.

Two Sides of the Reformation

Europe was soon divided into two blocs with the spread of the Reformation. The victory of the new faith in German Switzerland was feasible because of the efforts of Ulrich Zwingli (1484–1531). Another notable figure in Protestant Reformation, Frenchman John Calvin (1509–64), emphasized faith and called for a return to the Bible. He was of the belief that the church and state were essential for society and authority, for both were given by God. Calvinism did not make state supreme over the church, a point propounded by Luther. He encouraged the civil and ecclesiastical officers to work together against wickedness.

Calvin’s theological system was indirectly responsible for the cause of democracy and was embraced in England, Scotland, and the Netherlands, where democratic tradition was gaining ground. The Puritan tradition also became effective as far away as the New England colonies. Protestant scholars went to Geneva, a center of Calvinist teaching, and took back Protestantism to their home countries in Europe. Calvin gave much importance to education and set up a training school for Protestant theologians, which eventually became the University of Geneva.

The Huguenots, or French Protestants, did not succeed in making reformation a national movement. Francis I (r. 1515–47) had already made arrangements with the papacy by the Concordat of Bologna in 1516. The persecution of the Huguenots reached its height in the St. Bartholomew’s Day Massacre in 1572. The religious wars were brought to an end by the Edict of Nantes in 1598, and the question of the Reformation was settled in France for the time being. The Reformation also did not make much headway in the Netherlands, which was under control of the Holy Roman Emperor Charles V.

Calvinism spread after 1555, when Charles V bequeathed the Netherlands to his son Philip II. Dissatisfaction arose in the country because of the king’s administration, excessive use of Spanish troops, and heavy taxation. In 1568, the Inquisition condemned the people of the Netherlands as heretics. There arose an uprising in northern provinces under William of Orange-Nassau, prince of Orange. The northern region proclaimed independence and the “United Provinces” became the Protestant kingdom of Holland. John Knox took Scotland toward Protestantism and left a legacy known as Presbyterianism. From 1559, Knox became the leader of Protestant rebellion against the Catholic regent of Scotland, Mary of Guise.

England’s break with Rome came when King Henry viii (r. 1509–47) attacked the papal authority in England over the divorce question. The Acts of Appeals of 1533 forbade any appeal to Rome. Henry VIII proclaimed himself the head of the Church of England by the Act of Supremacy of 1534. The Reformation parliament (1529–36) attacked the property of the church and dissolved the smaller monasteries. In 1539, greater monasteries were dissolved. In the subsequent reign of Edward VI, the Protestant Reformation made great strides. The efforts of King Christian II of Denmark made the Reformation easier in Denmark and Norway. Gustavus Vasa (r. 1523–60) introduced the Reformation in Sweden for political reasons; the king became supreme authority pertaining to religious affairs. Although the Reformation did not succeed in Italy and Spain, it effected change in Hungary and Transylvania.

The Reformation produced the Catholic Reformation or Counter-Reformation, which endeavored to remove abuses. Reform-minded Pope Paul III entrusted the task of addressing abuses to cardinals. The Council of Trent (1545–63) removed some of the abuses and there was improvement through the efforts of popes such as Julius III (pope 1550–55), Paul IV (pope 1555–59), and Pius IV (1559–65), all of whom enforced discipline. The order of Jesuits acted as missionaries to purify the church. The Roman Catholic Church regained some of the ground that it had lost.

The Protestant Reformation was a watershed in the history of Christianity and its consequences were far-reaching. National language and education developed, and religion became accessible with the use of a common vernacular. The rising bourgeoisie saw in Protestantism reiteration of qualities like hard labor and thrift, which strengthened the economy. The glorification of national states became the precursor to nationalism. The call of Calvinism and Puritan revolution had its echo in the American colonies, leading to the Declaration of Independence.