This sample Middle Ages Essay is published for informational purposes only. Free essays and research papers, are not written by our writers, they are contributed by users, so we are not responsible for the content of this free sample paper. If you want to buy a high quality essay at affordable price please use our custom essay writing service.

The Middle Ages, or medieval period, lasted roughly from A.D. 500 to 1500. It was an era of great changes in civilization, a transition between ancient times and the modern world. With the rise of the Roman Catholic Church and other institutions, Western Europe during this period grew apart from Eastern Europe, which centered around Greece and its Orthodox Church. The Middle East at the same time experienced the explosion of the Muslim, or Islamic, faith, and the region became home to a series of Arab and Turkish empires. Farther east, and in Africa and the Americas, other great empires—among them those of the Chinese, the Mongols, and the Incas—rose and fell.

Most historians link the beginning of the Middle Ages with the fall of the Roman Empire, the long decline of which can be traced to the A.D. 200s. By the 300s, Rome had adopted many practices that would come to characterize medieval life. Whereas ancient Romans had worshiped the old pagan gods such as Jupiter, now the official religion of Rome was Christianity—though a form of Christianity heavily mixed with pagan practices. And whereas the ancient Roman economy had been based on slavery, Rome in the 300s already had the beginnings of a new system called feudalism.

The Western Roman Empire fell in 476, but the Eastern Roman Empire continued as the Byzantine Empire throughout the Middle Ages. By the time the Byzantine Empire fell in 1453, the medieval period was coming to an end as Europe began experiencing a full-scale transformation in the arts, science, politics, and even religion. The awakening in the arts and science was called the Renaissance, or “rebirth”; similarly, the Reformation heralded the re-formation of religion and even politics. The Renaissance and Reformation had their beginnings in the 1300s, and gathered steam after 1450 with the invention of the printing press, which made it possible to spread ideas much more quickly. Around the same time, the Age of Exploration began with the first European voyages around the coast of Africa. These events collectively brought about the end of the Middle Ages, and the beginning of the modern world. 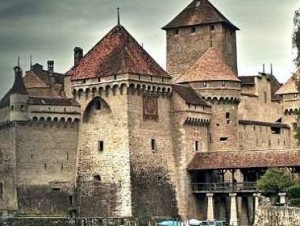 People in the Middle Ages did not think of their time as “a middle period” between ancient and modern times; that idea only arose during the Renaissance. As Europe reawakened in the 1500s, it was hard not to view the Middle Ages as a time of ignorance and confusion, an interruption in the progress of humankind. This was particularly true of the millennium’s first half, from about 500 to about 1000. People began to refer scornfully to medieval times as “the Dark Ages,” and for many centuries thereafter, this remained the accepted view.

In the twentieth century there was a backlash against this interpretation, and indeed it became almost “politically incorrect” to refer to the medieval period as the Dark Ages. Yet the Dark Ages viewpoint is not necessarily inaccurate. There can be no question that, in terms of political organization and technology, Western Europe took many steps backward during the centuries leading up to and following the fall of Rome.

The Dark Ages interpretation, however, fails to take into account the many great achievements made by Western Europeans during the Middle Ages—from the beauty of manuscript illumination and Gothic architecture to the literary classics of Augustine and Dante. On the political and social level, the Middle Ages laid the groundwork for modern times, bringing into being the first nation-states such as France and England, and establishing the conditions for explosive economic growth in future centuries. The medieval period was far from a dead spot between ancient and modern times.

The Middle Ages around the World

The idea of the Middle Ages in general, and of the Dark Ages in particular, is specifically European in origin— or rather, Western European. In contrast to Western Europe, Eastern Europe experienced no dark age, and indeed became home to a splendid reminder of ancient Greek and Roman glory in the form of the Byzantine Empire.

Nor did the Arabs of the Middle East view the period as a “dark age”: beginning in the 600s, Arabia experienced a cultural flowering on a scale seldom equaled in human history. While the ancestors of the English and French were still mostly illiterate peasants living in drafty huts, the Arabs enjoyed a degree of civilization that easily put them on a level with ancient Rome. It is not surprising that when they first encountered Western Europeans during the Crusades beginning in 1095, the Arabs viewed them as ignorant, foul-smelling brutes. Even in modern times, Arab historians do not typically view the millennium that began in A.D. 500 as a “middle age,” especially since the Muslim world does not use the same calendar as Europe: instead of dating their years from the birth of Jesus Christ, Muslims begin with the prophet Muhammad’s escape from the city of Mecca in A.D. 622.

Much farther east, the Chinese not only had their own calendar, but their own long and distinguished history— a history that had nothing to do with Europe. In fact, prior to about A.D. 100, the Chinese did not know that Greece or Rome existed, nor did they much care when they did learn of the fact. In their view, China was the center of the world, and all other peoples were barbarians to varying degrees. Just how barbarian the Chinese thought others were, of course, had a great deal to do with how much or how little their culture was influenced by that of China.

Moving farther east—so far east, in fact, that it is considered west—one finds the Mayan civilization in what is now Mexico and Guatemala. The Maya had never heard of Western Europe, Arabia, or China, placing them even farther from the Western European world of knights and castles. Nonetheless, the peoples of America, as well as Africa and other regions covered in this series, had their own unique experience of the period that in the West is known as the Middle Ages.