This sample Ancient Mesopotamia Essay is published for informational purposes only. Free essays and research papers, are not written by our writers, they are contributed by users, so we are not responsible for the content of this free sample paper. If you want to buy a high quality essay at affordable price please use our custom essay writing services.

Mesopotamia, often called “the Cradle of Civilization,” was the birthplace of the world’s first civilization, Sumer. Mesopotamia was home to some of the world’s greatest civilizations as well—not only of Sumer and the related culture of Akkad but also of Babylonia and Assyria. From these countries came the world’s first legal system, the Code of Hammurabi, and the first great tale in Western civilization, the Gilgamesh Epic. The cuneiform of Sumer was the first known form of writing and probably influenced Egyptian hieroglyphics. Israel felt the influence of Mesopotamia: Tales from the region provide the source for many of the great stories in the early chapters of the Bible, and later the Israelites would become captives of the Assyrians and Babylonians. From the mud of Sumerian huts to the stars mapped by the astronomers of Babylon, there were few aspects of ancient life not touched by the brilliant cultures of Mesopotamia.

The name Mesopotamia is Greek for “between rivers.” On the eastern edge of this region, located in southwest Asia, is the Tigris River; to the west is the Euphrates. The rivers flow out of the mountains in southeastern Turkey and ultimately come together before emptying into the Persian Gulf. Today the whole of Mesopotamia lies inside the nation of Iraq, which has continued to be a focal point for the world’s attention. It is a dry, parched land, but once its soil was so rich that historians refer to Mesopotamia as part of “The Fertile Crescent.” The Fertile Crescent describes a strip of land that included the Nile Valley in Egypt as well as Mesopotamia. The region is so named because a line in the shape of a crescent, or half-moon, would join the two regions. Today the area surrounding Mesopotamia is called the Middle East. 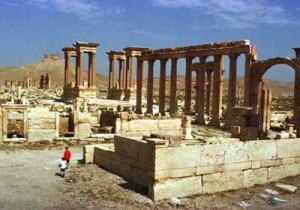 Even though historians tend to treat Egypt as the world’s first major civilization, in fact civilization first developed in the region of Sumer. No one knows quite when this happened: the first settlers could have arrived anywhere between 6000 and 4500 B.C.

This first group was the Ubaid culture, which settled in the marshes of southern Mesopotamia—an area that remains marshy today. Historians know little about the Ubaidans, but they seem to have had a fairly sophisticated knowledge of irrigation, or methods of keeping crops watered. They also knew how to make pots of baked clay, and built their houses of reeds from the nearby marshes. At some point their area was invaded by Semitic tribes from the southwest, in modern-day Saudi Arabia, but the two groups eventually became one through marriage.

By about 3500 B.C., the intermarriage between various groups produced the people known as the Sumerians. The Sumerians in turn established virtually all the essentials of civilization over the next 800 years.

One of the most brilliant cities of the ancient world was Babylon. In its legal codes and its sciences, it stood at the furthest advances of human understanding. Its Hanging Gardens were among the Seven Wonders of the Ancient World.

Founded by the Amorites, a previously nomadic people from Arabia, it existed as early as 3000 B.C. For nearly a thousand years, it remained under the control of Ur and later the Akkadians. But the invasion of Ur in 2000 B.C. was an indication that the Amorites were on the move, and in 1894 B.C., an Amorite chieftain named Sumu-abu took over Babylon. A century after Sumuabu would come the only truly great leader in early Babylonia— and one of the great figures of human history.

Third among Mesopotamia’s great civilizations was that of Assyria, which arose earlier than Babylonia and ended sooner. But it would be a mistake to assume that these groups—Sumerians, Babylonians, and Assyrians—were the only peoples of Mesopotamia. There were of course the Aramaeans, whose one contribution to the culture of the area, their language, was exceedingly important. There were the other groups that menaced Babylonia, including the Hittites and the Persians. Also there were the peoples at the fringe of Mesopotamia, who either threatened or were threatened by the Babylonians and Assyrians. Principal among these were the Israelites, who became captives of both nations.

Finally, there were the smaller groups of earlier times in Mesopotamia, who ultimately became part of larger cultures. Among these were the Akkadians, who became so completely tied to Sumerian culture that it is impossible to talk about the one without the other; and there were city-states such as Mari and Isin, ultimately absorbed in Sumer and Babylonia respectively. There were also the Hurrians, who entered the region in about 2000 B.C. and established the kingdom of Mitanni, which flourished briefly between 1500 and 1300 B.C. Caught between the powerful Hittites to the north and the even more powerful Assyrians to the south, Mitanni survived by making an alliance with Egypt; but eventually the Egyptians lost interest in this relationship, and courted favor with the Assyrians. That was the end of Mitanni, whose two threatening neighbors devoured it.

Despite the many names and the many cultures, however, there remained three primary Mesopotamian groups. But since the Sumerians disappeared from the scene much earlier, Mesoptamian history between about 1800 and 600 B.C. can be characterized as a great competition between two cultures, Babylonia to the south and Assyria to the north. Both had great capital cities along the rivers of Mesopotamia: Babylon on the Euphrates and Nineveh on the Tigris. Both grew out of Amorite groups who absorbed the Sumer-Akkad civilization, and they were similar in language, religion, and other cultural aspects. Perhaps because they were so similar in some ways, they were almost always in conflict, like two family members who cannot resolve their differences.

This pattern has repeated itself throughout history, from ancient times to the modern world. As ancient history is full of conflicts between related peoples, the twentieth century has been full of wars and conflicts between neighboring lands. Africa has been subject to countless struggles among and within nations of similar heritage. The countries that broke off from the nation of Yugoslavia entered a period of incredible struggle following the end of Communism there in 1992. Greece and Turkey have often been at odds with one another in the nineteenth and twentieth centuries, just as peoples of those two nations fought in the Trojan War more than 3,000 years before. The two greatest conflicts in history, World War I (1914-1918) and World War II (1939–1945) involved, among other issues, an age-old rivalry between Germany and France.

In some ways, the Assyrians and Babylonians can be compared with the German and French nations. Like the French, the Babylonians were noted for their splendid culture, which excited both the admiration and the scorn of other countries, who often tended to see them as people devoted to pleasure and high living. And like the Germans, the Assyrians were known for their talent at making war. For much of the first half of the twentieth century, Germany had an ambition of ruling the world, and it developed one of the most powerful military forces ever known. Similarly, Assyria wanted to rule the known world, and it created an army that terrorized many nations. This is not an entirely accurate comparison from historical perspective, of course, because Germany has produced all manner of cultural achievements in the arts and philosophy and their militaristic period lasted for only about 40 years, and France waged more wars than any other modern nation. Assyria is likewise remembered for its brilliant architecture. But the greatest talent of the Assyrians was the art of warfare.

The Legacy of Ancient Mesopotamia

Babylonia and Assyria fell first to the Persians and later to the Greeks under Alexander. Still later, Mesopotamia briefly became a part of the Roman Empire. In the A.D. 600s, like much of the Middle East, it fell to the conquering Muslims and flourished again as a part of their empire. The Muslims gave the area its religion, Islam, which is the faith of modern Mesopotamia. Again like most of the Middle East, it came under the rule of the Turkish or Ottoman Empire for many centuries, which only ended with the defeat of Turkey in World War I. Britain then took over, and for a time they revived the old name of the region.

The Assyrians and Babylonians could not have known that their great gods Ashur and Marduk, along with the other deities they worshiped, would be largely forgotten in modern times; or that the god of the people they defeated, the Israelites, would be worshiped by hundreds of millions of people. Yet thanks to the Israelites and their holy book, the Old Testament, the memory of those two nations was preserved throughout the Middle Ages (A.D. 500–1500) By contrast, Sumer, though its city Ur was mentioned in the Book of Genesis, would be lost to history for many centuries.

Viewing the landscape of modern Iraq, it is perhaps hard to believe that this region was once called the Fertile Crescent, a land of lush gardens and fruit trees maintained by the extensive irrigation systems of the various Mesopotamian peoples. The delta of the Euphrates in southern Iraq is still green in many places, but the constant fighting in ancient times destroyed most of the irrigation systems, and much of the country is dry, rocky desert.

Yet Mesopotamia lives on in modern culture, in the Gilgamesh Epic and in Hammurabi’s Code, in the days of the week and in the many other aspects of astronomy to which the Babylonians contributed. The building styles of the area, particularly in Assyria, have continued to fascinate architects. Among these was an American, Frank Lloyd Wright (1867-1959), often described as the greatest architect of the twentieth century, who included many Assyrian aspects in his designs.

Likewise it appears that the Romans made use of Assyrian styles in their monuments and other symbolism. Certainly the Romans, who built the greatest empire of the ancient world, must have been fascinated by the Assyrians’ talent for warfare, which influenced military tactics for centuries to come.