This sample Technology and Communication Essay is published for informational purposes only. Free essays and research papers, are not written by our writers, they are contributed by users, so we are not responsible for the content of this free sample paper. If you want to buy a high quality essay at affordable price please use our custom essay writing services.

As users we will come to rely on our handset as a single device to manage not just communications but much of our lives. It will truly become a “remote control for life,” with massively enhanced capabilities, advanced methods of user interaction and in-built tools . . . The substantial change that end users are going to witness has become possible more because the underlying infrastructure has become stable than because it is rapidly evolving. (Webb 2007, 35)

This quotation offers a technologist’s view of the potential of technological advance for new modes of communicative interaction based, in this instance, on innovations in handset technology. In this view, by the early part of the twenty-first century technological innovation in the fields of engineering concerned with the underlying communication infrastructure had stabilized, offering a foundation for current and yet-to-be-imagined applications (Gilder 2000). This observation echoes many of the technologically deterministic views that are frequently criticized in the humanities and social science literature that considers the relationship between technology and communication.

The Relationship between Technology and Communication

In the humanities and the social sciences it is generally understood that research and theory building in this area must be historically situated. Thus Smythe argued, for example, that technology and its relationship to communication are dynamically interrelated and best understood as having a number of constituents:

one part is bureaucracy (in both the private and public sector) . . . The second part is science which is being taken over increasingly by the third part, capital. The fourth part is tools and machines created by engineers. The fifth part is ideology which provides the raw materials with which the sixth part, propaganda, seeks to mould public opinion to accept the myth. (Smythe 1984, 2) 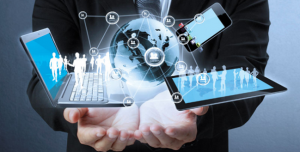 This definition embraces not only the technical features, but also the human and social dimensions of the relationship between technology and communication. The technologies of human communication are those that enable the establishment of communicative relationships virtually by creating a sense of co-presence or when participants in such a relationship are physically present. Analytically, the implications of the relationship between technology and communication for human development might begin at any point in human history, with, for example, the Phoenicians and their development of an alphabet, with the Sumerians and their development of cuneiform writing, or, indeed, with the Egyptians and their development of hieroglyphic writing – all between 3500 and 2900 bce. Historically, many types of information and communication technologies (ICT) have been used to mediate human communication (Innis 1951). The first wooden printing press was invented in China in 305 ce, with newspapers appearing in Europe in 1450. The first telegraph line was invented in 1793 by Claude Chappe, while 1876 saw the patenting of an office copying machine by Thomas Edison and the electric telephone by Alexander Graham Bell. Marconi transmitted the first radio signals across the Atlantic Ocean in 1902. The Internet (ARPANET) started in 1969, IBM’s personal computer was first sold in 1981, and the world wide web became available in 1994.

In the media and communication field there are many perspectives upon which one can draw to highlight the complex historical and current relationships between technology and communication. For instance, the way politics influences the relationship between technology and communication may provide the focus for research. Sussman’s (1998) Communication, technology, and politics in the information age examined the intersections between politics, society, and technology. Alternatively, a sociological approach may encourage a focus on cultural specificities and the ways new technologies become embedded in society. Marvin’s study When old technologies were new notes that “a recurring theme in the study of literacies past and present is how skill and technique for performing particular literate practices are transferred from communities of adepts to less skilled communities. What is not so easily transferred is the specific cultural setting” (1988, 14).

Another approach that is common in the literature on the relationship between technology and communication is that of the futurologist. In this case emphasis is often given to forecasts about the timing of inventions entering the consumer market. Innovations in ICTs have been forecast over periods as long as 60 years such that, for example, Neild and Pearson (2005) speculate that by the 2030s, learning will be superseded by transparent interfaces to a smart computer, by the 2020s network-based telepathy will be in use, and by 2017 the first bacterial computer will be available. No single disciplinary approach encompasses all the facets of the complex relationships between technology and communication.

New ICTs raise many issues with respect to ethical conduct within the humanities and the social sciences. Guidelines with respect to Internet-related research have been developed nationally and by organizations such as the Association of Internet Researchers (AoIR). Different methods raise concerns about the risks involved to researchers and to those they study. There are also conflicting views of ethical conduct, for example, with respect to online pornography, suicide pacts, or hate speech.

Analysis of the historical online record or memory requires an archive of the contents of the world wide web. Although web-harvesting programs have been available since 1995, there are many outstanding questions in this area, such as the representativeness of the results of web crawling and issues of standards, privacy, copyright, and ethical conduct. The results generated by Internet ratings systems also generate controversy, although the demographic and behavioral data are used by the advertising industry and by the research community. The profiles of users and of digital information can also be discerned through log-file analysis. There has been little analysis in the social sciences of the implications of these systems for markets or for public policy. Another online research tool is Link Analysis, or the study of hyperlinks between and within websites, giving rise to concerns about the sampling of links and the selection of content.

In the social sciences and humanities the technological foundations of mediated communication are sometimes neglected, but by the middle of the first decade of the twenty-first century there was a consensus that research should focus on relationships between online and offline activity (Orgad 2007). In essence, the Internet refers to a technological base and a set of standards upon which software applications rely in order to provide users with communication tools. The Internet is a cluster of technological innovations, infrastructures, applications, and social organizations that would not exist without its underlying communication infrastructure, upon which media and communication services operate. Innovations in ICTs have progressed with improvements stemming both from “technology push” and “demand pull” factors. Their application has been accompanied by debates about technological convergence and about competition between standardized digital platforms.

Although digitization has been found to contribute to the blurring of boundaries between segments of the media and communication industry, this does not always imply media convergence, that is, the convergence of networks or fully integrated and seamless communication between networks, services, and terminals. Since the Internet revolution in the late 1990s the boundaries between these platforms have become blurred, leading to changes in commercial leadership in ICT markets, with many new firms appearing on the scene.

The spread of digital networks, large increases in information-processing power, media convergence, and the growth of Internet-based communication have supported three key developments – search engines; P2P networking; and open source software development – that have called into question the sustainability of traditional business models and the legitimacy of information ownership protected through copyright legislation. The use of wireless communication is also enabling the growth of mobile communication, which, in turn, has substantial implications for the mobility of data, information, and people. Taken together all of these developments set the parameters for what some envisage as an age of ubiquitous computing. This refers to networking and computing technologies that are small, fast, interconnected, and cheap enough to be embedded in the environment and in everyday objects. Ubiquitous computing research – when it is grounded in the humanities and the social sciences – resonates strongly with the literature on cyborgs (a term for a biological, usually human, being enhanced by artificial components), especially with respect to debates about ethics and gendered relationships.