This sample Social Networking Essay is published for informational purposes only. Free essays and research papers, are not written by our writers, they are contributed by users, so we are not responsible for the content of this free sample paper. If you want to buy a high quality essay at affordable price please use our custom essay writing services.

Social networks are the interpersonal relationships people have with friends, family, colleagues, acquaintances, and others they may come into contact with directly or via media communications. Social network analysis is used to understand these social relationships and how they help explain individual and social behavior (Scott 2000; Wasserman & Faust 1994). Social networking is studied at multiple levels of analysis including dyadic, group, and system. There are three primary types of network data collection technique: local, partial, and complete (Morris 2004).

Local or egocentric techniques are used to measure a person’s local social network. For example, a researcher can record the first names of respondents’ closest friends, and then record data about the friends’ socio-demographic characteristics and other attributes. Local networks are amenable to random sampling approaches and can provide data generalizable to larger populations. For example, egocentric network data can be collected to investigate how interpersonal communications about a media campaign might influence its reception. Local or egocentric data are analyzed primarily using standard statistical software (SAS, SPSS, STATA). Partial or snowball techniques start with a set of respondents who provide the names of their social networks, who are in turn enrolled as participants (either all or some sample of the network ties). Partial networks can be used to study the spread of rumors or for subject recruitment. 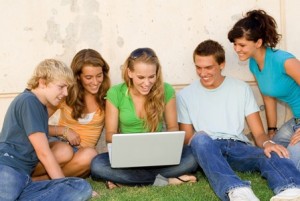 Complete or socio-metric techniques provide a measure of the entire social network by interviewing all members of a bounded community. Socio-metric techniques are most often used in small communities, schools, and organizations where the boundary of the network can be defined. They provide a global view of network relations and thus also provide indicators for individual positions in that network. Socio-metric techniques require the use of specialty social networking software, such as UCINET, Pajek, or R (visit www.insna.org for links to these programs), or specific mathematical programming to calculate network indicators. The ability to generate a complete social network map of social relations provides considerable explanatory power.

Social network analysis has developed along two related fronts: visualization and mathematical analytics (Freeman 2004). Visualization software enables researchers to display the set of connections in networks (Fig. 1) and understand the social structure by use of colors or shapes, or with variations in the lines connecting nodes, rotation of the graph, and other visual aids. Analytic techniques include the growth and sophistication of algorithms used to measure network characteristics (Newman et al. 2006).

Figure 1 provides a network graph or sociogram indicating who is friends with whom in one sixth-grade classroom (Valente et al. 2003). Each node is labeled with the ID number of the student, and the lines connecting them indicate who chose whom as a friend. Although this network is small (37 people), network analysis can be conducted on large networks (e.g., thousands of nodes) and some researchers study very large networks such as the Internet. 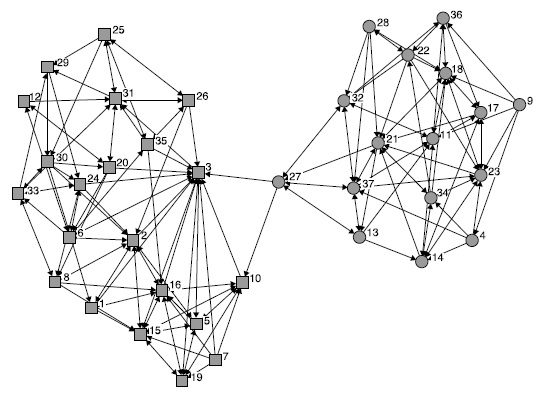 Figure 1. A friendship network among students in a sixth-grade classroom (boys shown by squares and girls by circles)

Social network measures are generated primarily at three ecological levels: the individual, dyadic, and network. There are hundreds of individual measures that can be generated from one social network question (Borgatti et al. 2005). For example, asking students for the names of their friends at school can generate hundreds of indicators measuring their relative centrality in the friendship network, their membership in groups, reciprocity of ties, and so on. The same data can be used to generate network-level indicators such as the degree to which the network is dense or sparse, its centralization, the number of cliques, their overlap, and so on.

One individual social network measure is centrality, which measures the degree to which a person occupies a prominent position in the network. For example, in Figure 1 persons 2, 3, and 21 are central nodes in the network, as indicated by how many friendship nominations they received. There are over a dozen measures of centrality (Borgatti et al. 2005). Another individual measure is a bridge or liaison: nodes 3, 10, and 27 are bridge nodes and the link from 27 to 3 constitutes a bridge. Other individual measures include being a group member or being an isolate. These individual measures can be related to individual behaviors. For example, researchers have shown that students who are central in friendship networks are more likely to become smokers in schools with a high smoking prevalence (Valente et al. 2005).

Dyadic measures can also be derived from the network in Figure 1. For example, one can calculate whether specific links are reciprocated, and the degree to which a person’s links are reciprocated. Another dyadic measure is homophily, which measures the degree to which a person’s ties are to others who have characteristics similar to ego. Homophily in networks creates pockets of interconnectivity (e.g., in Figure 1, boys overwhelmingly choose boys as friends while girls choose girls). Researchers also calculate network exposure to behaviors. For example, researchers have shown that adolescents with friendship networks comprised of smokers are more likely to smoke themselves (Valente et al. 2005).

Network-level measures characterize the overall structure of the network. Some measures are simple, such as network size and density, which indicate the number of people and links in a network. Other measures require some calculation, such as the average path length (APL), which indicates how many steps, on average, it takes to connect different people in the network (Watts 1999). It is easier to transmit messages in a network with a short APL than in one with a longer APL because there are fewer steps separating everyone in the network. Stanley Milgram’s early experiment showed that it took on average six steps for a message to reach a randomly selected person in Nebraska, and a Boston stockbroker created the “six degrees of separation” phenomenon (Watts 1999). APL is also used as a measure of network cohesion, since a shorter APL indicates a dense and closely connected network whereas a longer APL indicates a network characterized by long distances between people. Centralization measures the degree to which the network ties are concentrated toward one or a few nodes. Many scholars have discovered that networks are often centralized, characterized by few nodes having many ties, and many nodes having few (Newman et al. 2006).

Social network measures at the individual, dyadic, and network levels have been associated with behaviors in intuitive and counterintuitive ways. For example, bridges act as conduits for information flow across disconnected sub-groups in the network (Granovetter 1973) even as they can be bottlenecks which restrict the flow of resources. For a second example, studies have shown that as one’s network fills with others who hold certain opinions or beliefs, one is more likely to embrace those opinions or beliefs. Conversely, however, studies have uncovered network thresholds that indicate that some people are willing to adopt a new idea or practice even though none or few of their network partners do (Valente 1995). In another example, studies showed that dense networks accelerate diffusion of ideas and practices because there are more paths for information and influence to flow through. A recent study, however, documented that too much density inhibits adoption of new ideas (Valente et al. 2007).

Social networking analysis was originally applied mainly to the study of communication and interaction within small groups. Researchers investigated how the structure and patterns of their interactions reflected and affected individual outcomes such as depression, satisfaction, and success. Researchers were also interested in how network structural indicators might affect the overall success and performance of the group, community, or organization. The predominance of inferential statistical approaches in the social sciences meant that the more contextual approach and methods of social networks were eclipsed in favor of random independent sampling approaches.

By the mid-1990s, however, the growth in multilevel modeling and the Internet brought increased attention to connectedness and explicit data on interpersonal connections via computer communications. Social networking of online communities and patterns of communication via email could be studied. More powerful computer programs were developed to handle the analysis of large social networks. Thus social network analysis has emerged as a strong intellectual tradition interfacing with many different disciplines across the social, physical, and natural sciences (Monge & Contractor 2005).

There are many broad areas of emphasis currently being investigated in the network analysis field. The development of better and faster algorithms for calculating network indices at the individual and network levels continues. In addition, there is continued improvement in computer programs for the management, analysis, and display of social networking data. Many researchers have also been investigating how social network data can be used to accelerate the spread of ideas and practices, or for disease control and/or security threats, in addition to using network data to reduce the spread of disease or increase the capacity for collective action.

One of the central challenges facing social networking research has been the difficulty of applying inferential statistics and methodology to the analysis of social network data. Network data violate the independence assumption of inferential statistics and so need to be analyzed and interpreted with caution. Scholars have now begun to develop programs which can analyze network dynamics and behavior and study their co-evolution. Although it is in its infancy, the ability to understand the factors that affect the formation and dissolution of network ties, while studying how attributes of nodes affect, and are affected by, the network dynamics, promises to have a profound effect on science.