This sample Intercultural Communication Essay is published for informational purposes only. Free essays and research papers, are not written by our writers, they are contributed by users, so we are not responsible for the content of this free sample paper. If you want to buy a high quality essay at affordable price please use our custom essay writing services.

Major social changes of the twentieth century include international air travel, global business expansion, increased migration across national boundaries, and recognition of the civil rights of various minority groups. This means that individuals will frequently come into contact with people from other nations and from other cultural groups within a large and diverse nation such as the United States or Canada. When people consciously prepare for such contact, they may benefit from intercultural communication training programs.

Intercultural training programs are planned efforts that have the goal of preparing people to interact effectively with culturally different others (Brislin & Yoshida 1994; Bhawuk 2001; Landis et al. 2004). Programs are: budgeted, staffed by experts, sensitive to the needs and prior experiences of participants, scheduled for a time and place, and evaluated to determine if program goals have been met. Planned programs can be contrasted with an alternative, unfortunately still in existence. This is the “sink or swim” approach, where people are simply given international assignments, presented with an airplane ticket, and then have to survive in another country on their own. 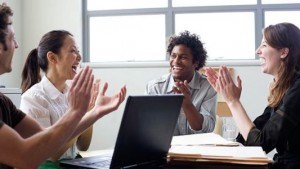 There are four goals in an intercultural communication training program. The same goals apply to international assignments (e.g., overseas business in Japan) and to intercultural assignments within a large country (e.g., teachers assigned to communities with large numbers of Spanish speakers in the United States). For convenience only, examples will be drawn from international assignments and people on such assignments will be referred to as “sojourners.” The first goal is that people enjoy and benefit from their experiences with people from other cultures. They can increase their chances of doing this if they understand culture, cultural differences, and culturally guided behaviors (Hofstede 2001). The second goal is that these positive feelings be reciprocated by host nationals with whom sojourners work. Sojourners, then, must learn to be sensitive to the reactions of others and to learn culturally appropriate behaviors that allow smooth interactions with hosts.

The third goal is that sojourners be able to manage the stress that is inherent in overseas assignments. Most often called “culture shock” when applied to extensive intercultural interactions, stress accumulates due to the many unfamiliar behaviors sojourners must learn in a very short time. Overseas businesspeople, for example, must adjust their leadership style, make sure their family is provided for, fit their work into organizational goals, and so forth. These and other tasks become overwhelming, leading to the frustration and helplessness that are the hallmarks of culture shock.

The fourth goal of training is that people accomplish the tasks called for in their work assignments. International students should complete their degree work on schedule, diplomats should make progress on intergovernmental treaties, and businesspeople should establish joint trade agreements.

Five basic training methods have received extensive attention (Brislin & Yoshida 1994; Bhawuk 2001). Most actual programs use a combination of the five approaches. The first approach is called cognitive, and it refers to the formal presentation of information that should be useful in assisting sojourners with their adjustment. International students in the United States, for example, should be told that they will be expected to “speak up” in class and especially in seminars, and that silent note taking will not insure success. The second approach, attribution, refers to conclusions that people in different cultures make about similar behaviors. Using the same example of international students, American professors often view silent note takers as unimaginative. The students might view their own behavior as showing respect for the professor’s greater wisdom.

The third approach, behavioral, starts with the premise that people seek out rewards and avoid punishments. They are asked to list behaviors they find rewarding in their own culture and also to list behaviors they avoid. Then, with the help of the training staff, they are encouraged to think through how they can carry out and avoid the behaviors, as appropriate, in the culture to which they are assigned. Culturally specific information can be integrated. People might want to make new friends quickly, but the training staff can alert them to the fact that, in many counties, relationships develop slowly and that people should be patient and wait for overtures from the host nationals. The fourth approach is role-playing, where people act out short scenes that are likely to occur on their actual assignments. Some scenes can be quite structured, as with typical patterns of exchanging business cards in Japan or Korea. Others can be unstructured, as with businesswomen making sure they are taken seriously during business negotiations in countries where almost all executives are men.

The fifth approach is called experiential, and it builds on role-playing to incorporate many aspects of life in the other culture that occur simultaneously. In a long training program of two weeks or more, an entire day might be devoted to behaving as if the sojourners are actually on assignment. They must use the host national language, eat the food, interact with others in socially appropriate ways, figure out ways around bureaucratic hurdles, carry out a teacher– parent conference according to host norms, and so forth. The experience can be frustrating, but staff members can point out that it is better to go through these multiple experiences in the presence of supportive trainers than it is to stumble through them unprepared on actual assignments.