This sample Group Communication Essay is published for informational purposes only. Free essays and research papers, are not written by our writers, they are contributed by users, so we are not responsible for the content of this free sample paper. If you want to buy a high quality essay at affordable price please use our custom essay writing services.

The study of group communication focuses on (1) the nature and effects of symbol usage in relatively small collectivities (a minimum of three people) on individual, relational, and collective processes and outcomes, as well as (2) how groups and group processes themselves are products of such symbolic activity. The study of how groups employ communication and how that communication is affected by and affects phenomena is called a symbolic-management focus; the study of how the significant symbol of “group” and group processes result from communication is called a symbolic-constitutive focus (Frey & Sunwolf 2004). Both perspectives view a group as a significant site of communication; indeed, Poole (1998) argued that because a group is the minimum unit of analysis for the confluence of influence associated with both individuals and social contexts, the group should be the fundamental unit of communication research. 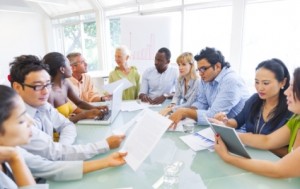 A number of theories have been developed to understand and explain communication in groups, including systems, functional, symbolic convergence, and structuration theories, as well as the symbolic-interpretive perspective. One of the most prominent ways of viewing a group is as a system comprised of inputs (variables that precede and potentially influence groups), throughputs (group interaction processes), and outputs (products resulting from group inputs and throughputs). From such a symbolic-management perspective, communication represents a throughput that is influenced by inputs (e.g., group members and relevant contexts) and affects outputs (e.g., decisions made and member satisfaction).

Another well-established symbolic-management theory that views groups through the input-throughput-output lens is functional theory. Functional theory argues that effective group decision-making (the chief outcome studied) requires the satisfaction of fundamental tasks or requirements, called functional prerequisites (e.g., thorough and accurate understanding of the choice-making situation), with communication being the means of satisfying these critical requirements.

Symbolic-constitutive theories include (1) symbolic convergence theory, which describes how recurring communication forms (e.g., fantasies, fantasy chaining, and fantasy themes) lead group members to share a common social reality (e.g., rhetorical visions), including the perception of being a group; and (2) structuration theory, which draws on sociologist Anthony Giddens’s work to explore how group members’ enactment of structures (rules and resources) produces and reproduces the group system, a process called “structuration.” The symbolic-interpretive perspective is a more recent theory grounded in these and other theories (e.g., rhetorical and dialectical perspectives), and employing a variation of systems language to focus on relationships among symbolic predispositions (inputs), symbolic practices (e.g., specific forms of symbol usage such as narratives), and symbolic processes and products (e.g., developing group climate and culture, with processes and products linked to reflect their recursive and reflexive relationship).

The study of group communication includes a focus on task and relational communication, investigations of laboratory and natural or bona fide groups, and the use of quantitative and qualitative methods.

Group researchers since the time of psychologist Robert Freed Bales have recognized, however, that groups also have a social or relational dimension. Historically, task and relational dimensions were seen as competing forces, but both are now viewed as necessary. Although some early researchers focused on how communication in laboratory decision-making groups affected outcomes such as member satisfaction, more recently, scholars have focused on relational messages (e.g., social support), processes (e.g., relationship development), and both positive (e.g., cohesiveness) and negative (e.g., groupthink) outcomes (see Keyton 1999; Barker et al. 2000) in many other types of groups, especially those in natural settings.

Although the study of groups in other disciplines, and some of the early studies in the communication discipline, focused on groups in their natural contexts, historically, because of its emphasis on the task, group communication was studied in the laboratory. For instance, Frey (1994) reported that his review of group communication research published during the 1980s, a prolific period because of the infusion of the theories described previously, revealed that the majority of that research studied student (72.3 percent), zero-history groups (64.1 percent), meeting once (72.3 percent), in a laboratory setting (59.6 percent); moreover, 50 percent of the research conducted in the field studied groups that were created for classroom purposes.

Although laboratory studies revealed much about group communication processes and their effects on decision-making and problem-solving, and some studies, such as those on new communication technologies were conducted in labs that mirrored natural settings (e.g., technology rooms in organizations), numerous critiques of the external validity of such research led communication scholars to start studying groups in their natural environments. In addition to natural task groups (e.g., organizational teams), researchers also started studying more relationally oriented groups, including families, friendship cliques, social clubs, support groups, children’s groups, and church groups, as well as gangs, cults, terrorists, and other “dark-side” groups. These studies of natural groups led Putnam and Stohl (1990) to advance the bona fide group perspective, which challenged the typical “container model” of groups as relatively closed entities with fixed boundaries and borders and focused solely on internal group processes, by arguing that groups demonstrated two interrelated characteristics: stable yet permeable group boundaries and interdependence with their relevant contexts. Subsequent studies have explicated these two characteristics (see, e.g., the studies in Frey 2003).

In addition to conducting experiments and surveys to study group communication quantitatively, group communication scholars have led the way in the use of interaction analysis, the quantitative observational study of discourse. Starting in the 1930s, followed by the pioneering work of Bales’s (1950) interaction process analysis (IPA), which coded for both task and relational communication, and Bales et al.’s (1979) extension of IPA, the system for the multiple level observation of groups (SYMLOG), and continuing to the present day, scholars developed numerous observational instruments to code and measure group interaction.

Studying group communication, however, poses some significant challenges, including: (1) a level-of-analysis issue of how much to focus on individual members versus the group as an entity (and the possible member relationships in between); (2) how to account for the fluidity and permeability of group boundaries and borders (as in the bona fide group perspective); (3) the unit of interaction to code (e.g., separate speech acts, complex combinations, or the entire group discussion); and (4) the designation of group variables (as the same construct, such as cohesiveness, can be an input, throughput, or output variable). Group communication scholars continue to debate how best to manage these methodological issues (see Poole et al. 1999).

Historically, the study of group communication was tied to practice – helping people to be more effective participants in democratic group decision-making. Scholars and practitioners have realized for quite some time that groups, when engaged in naturally occurring (free) discussion, often flounder and perform less effectively than might be expected; consequently, groups need facilitation – which typically means employing meeting procedures that specify how a group should organize its processes to achieve a particular goal. A plethora of group meeting procedures has been created, ranging from those that facilitate group creation, group conflict communication, group conversation or discussion, task group communication (e.g., from macrolevel issues of planning, decision-making, evaluating, and promoting change to micro-level procedures that help groups to structure, analyze, create, and agree), to those that promote team communication (see, e.g., Sunwolf & Seibold 1999; Sunwolf & Frey 2005; Frey 2006). Research on the effects of those meeting procedures, however, has lagged far behind the development of procedures. What research does exist suggests that these facilitation procedures work because they structure the communication that takes places in ways that prevent groups from engaging in faulty processes and that harness the strengths of groups.