This sample Enlightenment Anthropology Essay is published for informational purposes only. Free essays and research papers, are not written by our writers, they are contributed by users, so we are not responsible for the content of this free sample paper. If you want to buy a high quality essay at affordable price please use our custom essay writing service.

The period of European intellectual history known as the Enlightenment (roughly corresponding to the eighteenth century) has been frequently acknowledged as central to the emergence of social and cultural anthropology. Durkheim included Montesquieu among his scholarly forebears: Levi-Strauss adopted “Rousseau (and Chateaubriand); Radcliffe-Brown and “Evans-Pritchard acknowledged the philosophers of the Scottish Enlightenment as their intellectual ancestors; while Boas suggested “Herder; and “Edmund Leach, more recently, reclaimed “Vico as the founding father of cultural or social anthropology. More recently still, militant postmodernists often claim to be attacking a loose entity called ‘the Enlightenment project’ which has allegedly dominated Western social thought since the eighteenth century. In fact, the anthropology that emerged during the period of the Enlightenment was diverse, with distinct developments occurring in France, in German scholarship, and in Scotland.

What united these distinct developments was the central idea of Enlightenment thought, that humanity as we encounter it is not something simply given by God, but is something unfolding through time, a product, above all, of history. Within this new historical perspective the development of human society became a problem worthy of investigation, with particular emphasis on exotic ‘others’ and their relevance to European identity. In the early eighteenth century it was still considered important to compare indigenous American peoples with the peoples of antiquity (Lafitau’s Customs of the American Indians Compared with the Customs of Primitive Times [1724]), and similar comparisons were extended to peoples from the East Indies (Moravia 1970; Krauss 1978). 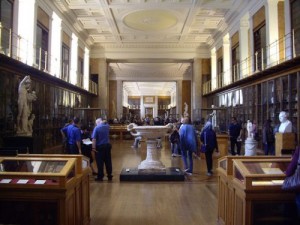 ‘Savages’ (noble or otherwise) occupied a prominent place in theories on the progression of human society, particularly the four-stage theory of the history of humanity. This theory (often misrepresented as the three-stage theory) held that humanity progressed from hunting through animal husbandry and agriculture to commerce. The four-stage theory was first put forward by A.R.J. (Baron) Turgot in 1750 and adopted by J.-J. Rousseau in his Discourse on the Origins and Foundations of Inequality among Men (1755). In Scotland Adam Smith, Dalrymple and Lord Kames presented their own versions in the 1750s (Meek 1976).

French philosophers concentrated on investigating the ‘spirit’ of laws and nations. Montesquieu set the tone by publishing The Spirit of the Laws (1748) which had as its object ‘the laws, customs and diverse practices of all the peoples of the world’. Voltaire published his Essai sur les moeurs et I’esprit des nations (1756), to which he later added an introduction to philosophy of history. Duchet (1971) has surveyed the anthropology of Voltaire, Buffon, Rousseau, Helvetius and Diderot.

Whereas these French writers connected developments in the mode of subsistence to intellectual developments (in Turgot’s case, from the theological through the metaphysical to the empirical stage), the philosophers of the Scottish Enlightenment concentrated on the connection between stages of economic development and socio-political organization. Scottish Enlightenment thought centered on the moral status of ‘man’. The concept of morals was important for the transition to ‘social principles’ and gave the movement its name. The ‘moral philosophers’ David Hume, Adam Smith, Adam Ferguson, Lord Kames, William Robertson and Lord Monboddo concentrated on social and political issues, arguing that man has an innate ‘moral sense’. Primitive peoples figured extensively in their theories since, as Ferguson put it in his Essay on the History of Civil Society (1767), ‘it is in their present condition, that we are to behold, as in a mirror, the features of our own progenitors’. Ferguson’s Essay contained ethnographic information, particularly in a section entitled ‘The History of Rude Nations’; the same holds for Kame’s Sketches of the History of Man (1774). William Robertson produced two volumes of The History of America dealing with the Spanish territories (1777), while two volumes on Native Americans in Virginia and Massachusetts were published posthumously (1793-4). In the historical works of Ferguson, Kames, Robertson and others, ethnographic data on the peoples of the world served to illustrate the presumed development of human society.

The study of universal history was also of great importance in the German Enlightenment. Here a new area of study came to the fore: Volkerkunde, or the science of peoples (in contrast to Volkskunde or the science of the people). In Germany the ‘philosophy of history’ (developed by Voltaire and others) divided into two branches. One studied the actual history of humankind and its diversity and customs in what could be called a ‘culture-conscious’ manner; the other branch was more interested in principles of history at the level of humanity, instead of peoples, and worked with the concept of ‘spirit’ (Geist) instead of ‘culture’ (Kultur). Kroeber and Kluckhohn claim that the first of these branches resulted in a ‘somewhat diffuse enthnographic interest’ (1952: 19), but in fact it produced a genuine Volkerkunde that was not ‘diffuse’ but descriptive, historical and universal.

From the 1760s to the 1780s, various authors in the German-speaking countries and in Russia formulated, classified and practiced a discipline called ethnographia (1767) or Ethnographie (1771). These terms appeared as neo-Greek synonyms of Volkerkunde (1771), in the works of German historians working mainly at the University of Gottingen. The term ethnologia came later, in the work of the Austrian scholar A.F. Kollar (1783), followed by ethnologic in the work of A.-C. Chavannes (1787). From the 1770s onwards, Volkerkunde (ethnography and ethnology) grew into a discipline that developed in relation to history, geography, natural history, anthropology, linguistics and statistics. In 1781 the first issue of the 27-volume journal Beitrage zur Volker- und Landerkunde appeared in Leipzig. In 1787 a young scholar-translator, T.F. Ehrmann, published the first overview of the aims and contents of Volkerkunde in a popular magazine for women.

The popularity of the subject was greatly enhanced by geographical discoveries in the Pacific, especially reports of Tahiti (1767), which led to a further romanticization of nature and the ‘savages’ (les naturels, as the French called them). Scholars in Germany, Switzerland, Russia, Bohemia, Austria-Hungary, the Netherlands and France rapidly adopted the new disciplinary vocabulary during the last decades of the eighteenth century, and the United States and Britain soon followed. Apparently the concepts met a need, which in the early nineteenth century led to the establishment of ‘ethnographical museums’ and ‘ethnological societies’ (Vermeulen 1995). At the same time the physical study of humanity was developed by Buffon, Camper, Monboddo, Hunter, Blumenbach, Soemmerring, White, Cuvier and others.

Thus, alongside the comparative study of moral systems in France, the conjectural study of the development of human society in the Scottish Enlightenment, and the biological study of humanity, we find a strong research tradition in Central and Eastern Europe that focused on the historical relations between people and nations — not only in the non-Western world but also in Europe itself. This tradition was fostered not in centralized states like France and Britain, but in multi-ethnic countries with greater sensitivity to social formations ranging from ethnic groups to national cultures and nation-states.

These diverse approaches were linked by an adherence to the principle of progress by reason, as well as the idea of the ‘Great Chain of Being’. This led to a historicization of science, which was very fruitful for the study of humanity. However, a critique was formulated in the work of early Romantics like Rousseau, and particularly J.G. Herder (Ideen zur Philosophie der Geschichte der Menschheit, 1784—91). In their writings, anthropology — especially the emerging tradition of Volkerkunde — was criticized for its classificatory method and augmented with a relativist and pluralist perspective (see Berlin 1976).

The eighteenth century closed with fWilhelm von Humboldt’s Plan einer vergleichenden Anthrophologie (1795) and Kant’s Anthropologie in pragmatischer Hinsicht (1798) in Germany; and the short-lived but important Societe des Observateurs de l’Homme (1799—1804) in Paris. That society adopted ideas developed in Germany, but was inspired by ideas of the Ideologues (Cabanis, Volney, Jauffret, Degerando) that already belonged to a later age (Moravia 1970; Copans and Jamin 1978).

Anthropology during the Enlightenment was diverse and diffuse; the early twentieth-century idea of anthropology as a ‘unified science of man’ does not apply to the eighteenth century. Nonetheless, steps were taken in a number of fields towards the formation of anthropology as the general study of humankind, its history and diversity, to the extent that the Swiss theologian Alexandre-Cesar Chavannes hailed it in 1787 as la science nouvelle. Among these fields were natural philosophy, ^comparative religion, historical linguistics, geography, universal history, natural history, ethnology, and ‘proto-sociology’.