This sample Chinese Anthropology Essay is published for informational purposes only. Free essays and research papers, are not written by our writers, they are contributed by users, so we are not responsible for the content of this free sample paper. If you want to buy a high quality essay at affordable price please use our custom essay writing service.

In 1902 the Japanese Ariga Nagao’s The Evolution of the Family, based on Morgan, was translated into Chinese. But there had long been a tradition within China of writings and pictorial representations of minority and neighboring peoples perceived as exotic or ‘barbaric’. Other translations of Morgan, Westermarck and “Durkheim, followed, and a number of ethnographic schools had been established within China before the 1949 Revolution.

From 1928 Cai Yuan-pei (1896-1940), who had studied at Leipzig and Hamburg, directed a number of ethnological studies influenced by evolutionary theories at the Central Research Institute in Beijing; these included studies of Taiwanese native peoples, the Miao, Yao and She minorities, and the Northern ethnic groups, by ethnographers such as Ling Chunsheng and Ruey Yih-Fu, Tao Yunkui, Yan Fuli, Shang Chengzu and Lin Huixiang. Diffusionist influences were dominant at the Catholic Furen University of Beijing, and the works of Durkheim, Boas and Kroeber were widely known. A close relationship was established between anthropology and history, with an emphasis on the study of China’s minority and border peoples which was ethnological in nature. 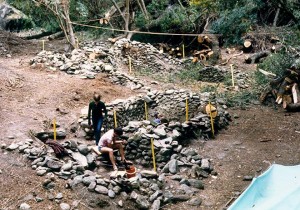 The British functionalist influence of Malinowski and Radcliffe-Brown, concentrated in the sociology department of Yanjing University, modified by that of the Chicago school, was to become paramount in China. A number of pioneering studies of minority and Han social organization were directed by Wu Wenzao at the Yanjing-Yunnan Station for Sociological Research set up in 1938. Researchers included Fei Xiao-tong, Lin Yao-hua, Tien Ru-kang, Francis L.K. Hsu, who had all studied at the London School of Economics, and Martin C.K. Yang.

There were few academic positions in anthropology, however, and the argument put forward by functionalists that Chinese anthropology was a form of sociology had important repercussions after the Revolution, since sociology was banned from universities after 1952. Many lecturers joined history departments or the Central Minorities Institute, founded in 1951 with Fei Xiao-tong as its vice-president, or the nine Nationalities Colleges established from 1951. Some ethnographers fled to Taiwan, while others sought refuge in the United States. After 1949 the attempt to apply Stalin’s definition of the ‘nationality’ and five-stage theory of social systems to the Chinese social situation led to a concern with the evolutionary classification of ethnic minorities. Under a twelve-year social history research programme from 1956 Fei Xiao-tong directed extensive studies of the nationalities which have only recently been published.

The anthropology of Chinese society outside China developed from the work of early Sinologists such as Granet and De Groot. It emphasized the use of historical sources and field research largely based on studies of Chinese communities outside China, particularly in Taiwan, Hong Kong and Southeast Asia, as a result of restrictions on foreign research within China following the Revolution.

Early monographs included the diffusionist-influenced work of Hans Stubel on the Yao and Li, of Fortune on the Yao of Guangdong, and Kulp’s 1925 study of Phoenix Village. The work of Maurice Freedman has been particularly influential, from his study of kinship in Singapore to his work on lineage organization and ancestral worship in southeast China (1966). Freedman’s work led to what J.L. Watson (1986) termed a ‘lineage paradigm’ of Chinese kinship which has been criticized as over-reliant on the southeastern coastal region of China. Since then studies based largely on fieldwork in Taiwan have modified and questioned the original thesis. Freedman’s interest in Chinese religion has been followed by a number of recent works concerned with the revival of popular religion and its persistence in Chinese society. Early work by Barbara Ward on the fishing communities and popular culture of Hong Kong was also important in illuminating the extent of regional variation within Chinese society.

Following the creation of the Academy of Social Science in 1978 and the republishing of the journal Minzu Yanjiu (Nationality Studies) from 1979, there has been a revival of anthropological interest within China. A national symposium on ethnology was organized in Guiyang in 1980, followed by the reformation of the Chinese Ethnological Society. In 1979 the Chinese Anthropological Association was established, based at Xiamen University. Socio-cultural anthropology has always been overshadowed by the practical importance of ethnology, taken to refer to the study of non-Han minority peoples. A complex relation has obtained between folklore studies, somewhat acceptable to the Chinese Communist Party because of its emphasis on popular, non-elite peasant customs, and sociology or anthropology. Debates on the nature of culture and feudal tradition, religion and superstition, have taken place. A concern with modernization and development is now tending to replace the historical emphasis and class analysis of earlier studies.

The work of Fei Xiao-tong, who studied under Malinowski, Robert Park, and Shigorokorov, has been crucial in pioneering a vision of a China-specific anthropology as a form of applied sociology, concerned with practical issues of development and modernization, based on field studies of particular communities in combination with the use of sociological methods, and not unallied to political and administrative concerns.

The question of a specifically ‘Chinese’ anthropology has been an abiding concern since the 1930s. The publication in Taiwan of materials arguing for the Sinification of social science has led to ongoing discussions. Within China debates in anthropology are still often related to political discussions on the preliminary stage of China’s socialism, and the identification of the specific characteristics of Chinese socialism.

Currently, anthropology within China takes place through a number of institutional media, including the universities and the Academy of Social Science, the Nationality Affairs Commission and Nationalities Colleges, museums under the Ministry of Culture, national and provincial associations (such as the Southwest Nationalities Society) and journals. Academic exchanges with foreign institutes are increasing, and further translations of Western works have been made. A number of joint and individual research projects are in progress by younger scholars which should transform the nature of Chinese anthropology.