This sample Troy Essay is published for informational purposes only. Free essays and research papers, are not written by our writers, they are contributed by users, so we are not responsible for the content of this free sample paper. If you want to buy a high quality essay at affordable price please use our custom essay writing service.

The city of Troy, situated on the northwest coast of modern Turkey, occupies a special place in Western culture. The story of the sack of Troy told by Homer was considered history in antiquity, then myth, then imaginative poetry, and then history again. It provided a major theme for Western art throughout the millennia; created the archetype for the “hero”; and created a view of war, honor, fame, and aggression that many have blamed for the continued glorification of warfare in the West. During the late 19th century, the story of Troy showed something else: that myth can contain kernels of truth. The businessman-turned-archaeologist Heinrich Schliemann began to excavate a site tentatively identified as Troy. His stunning discoveries appealed to the imagination of many generations. After his death, excavations continued under W. Dörpfield, in his turn succeeded by C. W. Blegen. Activities ceased after 1938. After a hiatus of 50 years, excavations resumed in 1988. New finds conducted on a larger scale continue to provide important information.

Troy in Myth and Epic

Troy is best known as the city attacked by the Greeks to regain Helen, the wife of the Achaean king Menelaos, after she was kidnapped by a Trojan prince. The Iliad tells the story of the last ten days of the battle for Troy, or Ilion—hence “Iliad”—and the decisive battle between another Trojan prince, Hector, and his Achaean or Greek counterpart, Achilles. The Odyssey retells the story of the return home of one of the other warriors, Odysseus. The story of the preliminaries to the conquest and the return of Odysseus are set in a timeless world, thought to provide a much retold and therefore not very accurate description of early Bronze Age Greece, when writing, to our knowledge, was not used to transmit historical events. If the Iliad and Odyssey tell of true events, the poems must have been transmitted orally over a long period of time. The investigation of their oral origins during the late 18th century marks the beginning of philological research on “orality,” laying the foundation for modern research on orality, oral performance, social memory, and the role of oral transmission among nonliterate populations.

Troy, also known under its modern name of Hissarlik (or Hisarlik), and sometimes identified with the city called “Wilusa” by the Hittites, is situated in northwest Turkey, or Anatolia. During the second millennium BCE, Troy was about a mile away from the coast and provided protection for trading ships sailing into the Black Sea. The south wind, necessary to sail into the Black Sea, only blows during the spring and the fall, forcing ships to wait. Homer calls the city “Windy Troy.” It was only around the first century BCE that sailors learned to sail ships against the wind. A land trading route linking Asia Minor with Europe also led through Troy. Throughout time, Troy was an important site for visitors who exploited its fame for their own purposes. 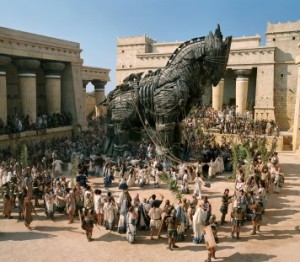 The Greeks believed that the Trojan War, as told in the Homeric epics, really did take place. The poems were performed and reperformed, and Greek literature borrowed its heroes, plots, and language. The Greek historian Herodotus (late fifth century BCE) explained the Persian wars as a continuation of the east/west conflict that had existed since Homeric times, a trope that was borrowed again and again. When Alexander the Great, who considered himself a descendant of Achilles, set off to conquer the East ca. 335 BCE, he stopped at Troy and made offerings at the temple of Athena. In 192 BCE, Antiochus III, the Seleucid king of Asia Minor, stopped at the same temple before attempting his invasion of Greece.

But the Greeks were not the only ones to claim the city of Troy as theirs: two years after Antiochus III, the Roman Consul Scipio visited the temple on his way to subdue Antiochus. The inhabitants of Troy, aware of its historical significance, happily obliged and received benefits from all visitors, such as tax exemptions and financial support for temple construction. The Roman connection is somewhat tenuous: some aristocratic families claimed descent from the Trojans. When the city was destroyed, they believed, some Trojans made their way to Italy via Carthage on the coast of North Africa. The hero, Aeneas, scorned the offer of the Queen of Carthage to share her kingdom: he claimed to be on a holy mission to find new land for his followers “in the west.” Thus, the story of the Trojan war provided a more noble excuse for Rome’s continued conflict and final destruction of Carthage, a conflict caused by trade rivalry. Caesar and his descendants claimed direct descent from Aeneas to justify their conquests in North Africa and Asia Minor (Turkey and beyond).

Although the Homeric epics were lost in the West during the early and late Middle Ages, the story of the sack of Troy was not. Theodoric the Great (453–526), king of the Ostrogoths, claimed some Trojans had fled up the valley of the Danube and settled among the Franks. Trojan descent was widely claimed by German nobles and provided a (lame) excuse for the sack of Constantinople during the Fourth Crusade (1204). Sultan Mehmed II, the Ottoman conqueror of Constantinople in 1453, recognized Troy’s symbolic power in his turn: he visited the fabled ruins, listened to a recitation of Homer, and announced that his conquest of Constantinople was in revenge for the sack of Troy by the Greeks two thousand years earlier.

During the Renaissance, Greek literature was reintroduced into the West and depictions of Homeric heroes and battles were rekindled in poetry and pictorial art. The fascination with the story grew, and during the Age of Romanticism the demands to free Greece from the Ottoman occupier gained force.

The Romantic view of Troy also inspired Heinrich Schliemann, who began excavations in 1870 on a site called His(s)arlik. Several trenches were dug through the man-made hill, revealing several layers of a city. One layer showed signs of burning, leading Schliemann to identify it as the Troy destroyed by the Greeks. Schliemann was the first to apply a technique called “stratigraphy” to conduct his excavations. Schliemann recognized 7 layers, with I (in Roman numerals) as the earliest one. This number was increased to nine by his successors, with several subdivisions indicated by letters of the alphabet. Excavation of such a long-occupied site—evidence recently has come to light that the site was occupied since the third millennium BC—is complex; old building materials were frequently used to construct new buildings, while the Romans razed the top of the hill for the temples whose construction they funded. Schliemann discovered the so-called “Treasure of King Priam,” a hoard of gold jewelry. He shipped it to Germany, to the dismay of the Turkish government. After World War II the treasure was lost—only to reemerge in the mid-1990s in the Pushkin Museum in Moscow.

Excavations resumed in 1988 under the joint leadership of M. Korfmann of the University of Tübingen and Brian Rose of the University of Cincinnati. Scholars of many other disciplines and countries participate as well. A problem in archaeology of the ancient world is that sites become the “property” of a country or a university, and as a result, publications appear in the corresponding language: in French (Olympia), German (Troy), or English (Athens). An added difficulty is that customarily, archaeological field reports are slow to appear. However, the team at Hisarlik is conscientious about rapid publication—in German.

The new (contested) finds show that after the city was destroyed during the 12th century, it was subsequently inhabited by Greeks—much earlier than commonly believed. They also show that Troy was an important center of political power in the second millennium BC.