This sample Temples Essay is published for informational purposes only. Free essays and research papers, are not written by our writers, they are contributed by users, so we are not responsible for the content of this free sample paper. If you want to buy a high quality essay at affordable price please use our custom essay writing service.

In the classification of architecture, the temple falls into the devotional class, that is, a building constructed as a place of worship. The ancient Indians, Egyptians, Sumerians, Greeks, and Romans all built beautiful temples, which are marked by their own individual characteristics. Temples in some form must have originated as soon as image worship came into vogue, for a temple is the “house of God.” In ancient Indian literature, temples are referred to as Devalaya or Devakala, meaning the house of gods. The earliest temples, therefore, were modeled after residential buildings.

The Brahmanical conception of a temple, however, is somewhat abstruse. It envisages the temple as the visible outer body of the invisible deity, a visible image of which is installed in it as a symbol of the invisible spirit that pervades all nature, that is, God himself, thus enhancing the status of the temple from the seat of the divine to the divine itself. Since the temple is considered the outer body of the deity, its various parts are given names that correspond to parts of the human body and are likewise decorated with architectural designs. For example, the outer face of a temple with a lavish display of ornamentation is the visible representation of the deity itself. 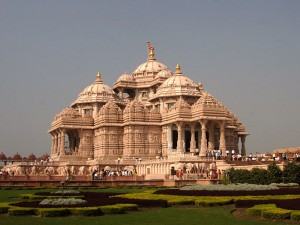 At the height of its architectural development, the Indian temple was the spiritual centre from which religious and social life was regulated. In addition, there is ample evidence of secular art in the temple architecture. The art on the temple walls and the terracotta panels witness the contemporary socioeconomic conditions of the people, thus supplying material for social history too. The Aryan, popularly known as the north Indian and Dravida, or the south Indian, are the two basic schools of Indian temple architecture accepted since the Vedic times. A temple is indicated as a Prasad in the north Indian and as a Vimana or Harmya in the south Indian school. Mandir, the most commonly used word nowadays, meaning a house made of stones, is altogether absent in the earliest known texts and inscriptions. Modern Indian writers recognize three styles of temple architecture: the Dravida, the Nagra, and the Vesara. The Indo-Aryan had no temples. The first small Brahmanic shrines made their appearance in the Gupta period (AD 350–650). Foundations of a single Vishnu temple (Hindu) of the second century BC, however, have been found at Besnagar in Madhya Pradesh. Gupta temples were simple and small with a small cella and carved doorways. South India is the true cradle of Hindu temple architecture. The Hindu temples vary regionally but generally consist of a towering shrine, central cella, and a columned hall surrounded by an elaborate wall. The Buddhists built cave temples, of which Ajanta is one of the most exclusive. There are more than 1,200 rock cut Buddhist temples in different parts of India. The medieval Jain temples are amazingly beautiful, built on remote and secluded mountaintops and made of white marble, shining against the blue sky; the most remarkable ones are found at Girnar, Palithana, and Mt. Abu.

In 3500 BC, the cities of Sumer were dominated by huge temples with hieroglyphs on the walls. Later, there appeared sculptures and figurines showing gods, priests, kings, soldiers, slaves, and animals. These were built on hills or mounds in the shape of a pyramid, with steps leading to the top where next to the low temple building stood a very tall tower where God was supposed to live. These mounds made of earth and the temples and towers on top of them were called ziggurats. Sumerian temples made an essential contribution to large-scale farming by synchronizing agricultural operations. They owned vast estates and employed their own establishments of slaves, controlled the farm lands, received taxes, and operated as markets and banks. The city-states were, in fact, temple-states that belonged to local gods. Temples in Sumer had many roles—religious, social, and economical. In Babylon there were two great temple areas. The temple of Marduk, the patron god of Babylon, is the best-known temple, besides nearly 400 smaller altars and 1,000 shrines. Ancient Egypt had two types of temples, the morgue temples for the dead rulers (for example, the temple of Queen Hat-Shepsut in Thebes) and divine temples that held images of gods. The divine temples had a typical architecture—avenues of sphinxes led to the temple flanked by two obelisks that represented the rays of the sun. The temple entrance was constructed with two huge towers called pylons slanted inward and a courtyard leading to a huge hall called a hypostyle hall. At the center was a shrine for the divine image. The Egyptian temples had flat roofs with columns inside. The temple of Karnak is one of the oldest and greatest. As in Sumer, the temple was the initial form of city in Egypt, as the land, people, ruler, and priests all belonged to the local god of the temple, which thus became the center of socioeconomic, political, and religious life. Temples owned huge properties, had slave labor working on temple forms, and were the chief money lenders. The classical Greek temples were rectangular with slanting roofs supported by beautiful columns, with a portico at each end or a colonnade extending around the entire building. The temples were east facing, made of marble or other stones, and the central cella housed the image of the deity standing on a pedestal facing the single door entrance; an altar stood outside the shrine. Later temples were collections of buildings including smaller shrines of related minor deities and national heroes, houses for priests, and stalls. The Greek temples of Apollo at Delphi, of Diana at Ephesus, and the Parthenon are the best examples of Greek architecture. The original Roman temples did not have the image of a deity for several hundred years. Influenced by the Etruscans, early Roman temples were oblong wooden structures with a huge inner cella. It was only later, when they came under Greek influence, that they adopted Greek gods at the cost of neglecting their own. The Pantheon, meaning “all the gods,” the most outstanding Roman temple, is a circular building with a huge dome made of concrete. Roman temples had an altar inside the shrine and instead of the colonnade around the entire structure there was a wall of engaged columns. Temple architecture reached its pinnacle in size and splendor during the Roman Empire. The Inca and Mayan temples were generally stairstepped pyramids with the shrine at the top constructed of stones and decorated with stucco and bas-relief ornamentation. The Temple of Warriors and the Temple of the Plumed Serpent are the best examples of Mayan and Aztec temples, and the Temple of the Sun at Cuzco is the best example of Incan temple architecture.