This sample Stonehenge Essay is published for informational purposes only. Free essays and research papers, are not written by our writers, they are contributed by users, so we are not responsible for the content of this free sample paper. If you want to buy a high quality essay at affordable price please use our custom essay writing service.

Stonehenge is one of the most recognized formations of megalithic architecture and has a long history of speculation as to its builders, age, function, and changes over time. Located on the Salisbury Plain in Wiltshire, England, it is one of over nine hundred such circles of standing stones in Great Britain alone. Thousands more are evident in France (especially along the coast of Brittany), Spain, Denmark, Italy, and Malta.

Megalithic (mega = large, lithos = stone) architecture is generally characterized by three components: a tumulus; a large artificial mound or communal burial site; and a collection of large stones. It is one of the major characteristics of the western European Neolithic age and represents one of the earliest known stone architectures in the world. This architecture appeared from the fifth millennium B.C.E. as the agrarian way of life compelled a more sedentary existence. It can be termed simple when it involves a single standing stone, a menhir, placed in stark contrast with the surroundings; open but more complex if many standing stones are arranged in a circle, semicircle, or aligned in parallel rows; and closed when the stones are used to construct a burial chamber and covered with a tumulus.

A henge is an English term denoting a usually circular, prehistoric structure and earthworks, which can consist of a ditch, mound, wood, and a series of standing stones, of which Stonehenge provides one of the most striking examples. 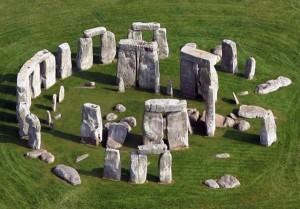 The construction of Stonehenge has been divided into roughly three periods. The first division, using radiocarbon dating methods, is calculated at ca. 3000 BC and was composed of a circular enclosure surrounded by two banks of earthworks, with the outer bank 380 feet in diameter, 8 feet wide, and about 3 feet high, and with a ditch between. The ditch varied in width between 10 to 20 feet and 5 to 7 feet in depth. Artifacts taken from the ditch confirm the date of construction. The inner bank was composed of a local chalk work about 6 feet high and 20 feet wide, with a diameter of 320 feet upon which were positioned a pair of portal stones. To the northeast was a 35-foot entrance or avenue with a standing stone set back a short distance. This naturally shaped standing or heel stone, weighing about 30 tons, is about 20 feet long by 8 feet wide by 7 feet thick, with the lower 4 feet buried in the ground. It is inclined inward toward the circle at an angle of 30º from the perpendicular but is thought to have been erect originally. The stone is composed of sarsen, a very hard sandstone with a source at Marlborough Downs some 20 miles to the north. Stonehenge is composed of a variety of local materials and denotes a familiarity with the geological composition, texture, durability, and color.

Toward the end of this period, 56 Aubrey or X holes were dug inside the circle and varied from 2.5 to 6 feet in width and 2 to 4 feet in depth, spaced rather evenly in a 288-foot diameter circle. These holes were named after their 17th-century discoverer, John Aubrey, who described the filled-in circles that bordered the embankment. He speculated that Stonehenge served as a temple and that the avenue was oriented toward the point on the horizon where the sun would rise on the summer solstice. The heel stone added further weight to the directional hypothesis as it is placed in a direct line of sight for an observer standing exactly in the middle of the circle.

Four points within the circle denoting four post holes form a remarkably accurate rectangle, which may have helped in setting out the site or, according to American astrophysicist Gerald Hawkins, may have established a position for observation of the sun and moon. But one of the certain functions of the first Stonehenge was an interment site for at least 55 cremation burials found at various locations, some dated soon after the original site was completed.

Stonehenge may have retained this shape and its structure for centuries, but eventually the site was altered. During a second phase, the main new work done was a planned but partially completed double circle of blocks of bluestone. For the most part, they are made of dolerite, blue sandstone, and limestone. The chief deposit for the dolerite is the Prescelly Mountains in Wales, some 150 miles away, although bluestone blocks were present in a neighboring area centuries before Stonehenge was built. The avenue was reconstructed and followed a winding route from a repositioned entrance down to the Avon river some two miles away.

Before the circles were finished, major social and political upheavals took place and the stones were dismantled and the double ring holes filled in. Alterations were begun during this third period of reconstruction. More than eighty massive sarsen blocks, some up to 50 tons, were brought in from Marlborough Downs near Avebury, 25 miles away, and Stonehenge began to take its present form.

How these stones were conveyed, the amount of human energy expended, the time span, and the engineering expertise required are all daunting achievements. On a circle with a diameter of 100 feet, three upright sarsen stones were positioned and capped with a continuous ring of lintels in the center of the site. Within this circle, five even more enormous trilithons, or formations, consisting of two uprights supporting a lintel, were positioned in a horseshoe formation. These are the stones that dominate the landscape today and are the prominent feature at Stonehenge.

When these stones were in position, the discarded bluestones from the second period were dressed and erected in an oval setting inside the sarsen horseshoe. Its precise form is uncertain as they were dismantled once again and rearranged in their present form in a circle between the sarsen circle and the horseshoe.

A final discovery in 1923, Y and Z filled-in holes, formed two concentric rings of pits dug about 20 feet apart around the outside of the circle of stones. These may have been intended for a new placement or replacement of stones that was never carried out.

The major impact of Stonehenge is two-fold. As an engineering feat, it speaks of a society possessing the manpower, social organization, and engineering skills necessary to complete such a task. As to its astronomical significance, there are some striking circumstances of location and structures. The particular latitude of Stonehenge allows for the direction of sunrise at the summer solstice and midsummer rising full moon at its extreme southerly standstill position to be at right angles through use of the rectangle formed by the four stations. Had its position been a few miles north or south, there would have been misalignment. The position also gives a clear view of the horizon for 360º for celestial sightings. The different heights of certain stones, such as the Heel Stone and Station Stone, enabled an observer at the center to use the tops of these stones to line up with the distant horizon, thereby facilitating observations and alignments.