This sample Ramses II Essay is published for informational purposes only. Free essays and research papers, are not written by our writers, they are contributed by users, so we are not responsible for the content of this free sample paper. If you want to buy a high quality essay at affordable price please use our custom essay writing service.

Ramses II, also called Ramses the Great, was the third king of the 19th Dynasty of Egypt. He reigned for 67 years, from approximately 1290 BCE to 1223 BCE.

Ramses II brought Egypt to its height of prosperity and power. He was the son of Seti I (Sethos I) and Queen Tuya. Ramses acted as prince-regent during Seti’s reign and succeeded the throne after his father, even though he was Seti’s second son. Ramses was a charismatic leader who is most reknowned for his many building projects, which include the temples of Abu Simbel with their colossal statues, the completed hypostyle hall at Karnak, and the Ramesseum, a mortuary temple at Thebes. He also completed his father’s temples at Abydos and Luxor. During his reign, he moved the capital from Thebes to Piramesses (“House of Ramses”), which he built in the eastern delta of the Nile to expedite his campaigns against the Hittites in Syria. Piramesses possessed what was probably the largest stable in existence at the time.His military exploits ranged from Nubia and Libya to Syria, maintaining Egyptian borders to their greatest extent. 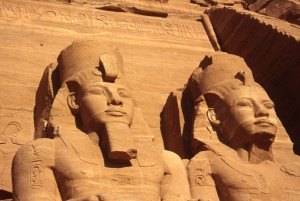 The Egypto-Hittite conflict over territory in Syria began during the reign of Seti I. The stalemate that existed between the forces of Seti I and Muwatillis of Anatolia was extended to Ramses. Muwatillis met the armies of Ramses at the famed battle of Qadesh, which was considered the turning point in the conflict with the Hittites. Ramses’s armies were nearly overwhelmed, but through his brilliant leadership and innovative strategy, he was able to turn the battle and escape defeat. Losses were great on both sides. It was not a decisive victory in the true sense of that word, as Ramses did not actually take Qadesh. The battle of Qadesh is documented on the walls of temples at Abydos, Karnak, Luxor, Abu Simbel, and the Ramesseum. There are at least 13 surviving accounts of the battle, making it probably the earliest detailed account of a battle in ancient history. Tensions between the Hittites and Egyptians continued for another 16 years. Mursilis III succeeded Muwatillis briefly, but it was with Hattusilis III that peace was eventually established between the two countries through what is the earliest known surviving stateto- state peace treaty in recorded history. Originally engraved on a silver tablet, copies were made and kept in each country. The treaty was also recorded on stelae at the Karnak temple of Amun and the Ramesseum. Peace endured between the Egyptians and the Hittites of Anatolia throughout the rest of Ramses’s reign. The two royal families exchanged letters and presents. Later, Ramses II married two Hittite princesses, in his 33rd and 37th regnal years.

Ramses II had a very large family, with over 100 children. His primary wives were the famed Nefertari, who was his first and favorite, and Isisnofret, who bore Ramses’s successor, Merneptah, his 13th son. Ramses outlived many of his sons, including Sethirkhepeshef and Khaemwaset.