This sample Pottery Essay is published for informational purposes only. Free essays and research papers, are not written by our writers, they are contributed by users, so we are not responsible for the content of this free sample paper. If you want to buy a high quality essay at affordable price please use our custom essay writing service.

Pottery is clay that has been manipulated into a particular form and heated to harden and maintain its shape and durability. Clay is found on much of the Earth’s surface. Depending on the area in which it is found, clay may have many characteristics. Clay may be found finer in texture, smoother and purer in some areas; in other areas the clay may be coarse with several foreign particles. Clay may also be found to be more flexible and pliable in some areas as compared to others. The characteristics and traits of the clay will determine the outcome and quality of the pottery that is produced. Clay is formed from two types of decomposed rock. Primary clay involves decomposed rock found among other rocks from which it originated. Secondary clay is made by decomposed rock, which has been washed down hills by means of waterways, and relocated from its place of origin. The outcomes will be determined by which material is used and in what quantities the ingredients are used as well. In its preparation, three materials are essential for the creation of pottery. Simply put, clay, water, and fuel to fire the objects are the ingredients needed to make pottery. Different types of pottery include materials such as brick, terra cotta, earthenware, stoneware, bone china, and porcelain. Primary clay is used in constructing porcelain, bone china, and earthenware, where as secondary clay is used in forming coarse earthenware and brick.

The Preparation of Pottery 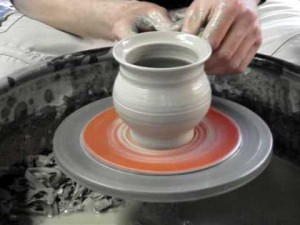 The construction of pottery involves the collection of clay and the addition of water. The clay that is to be used in the process of pottery making must first be prepared in a specific manner. Foreign objects and particles must be removed from the clay. Next, the potter constructs the form he desires by wedging the clay until it forms into the proper texture and consistency that is needed to form the object. Then it must be evenly proportioned in order to form the object properly. The object usually rests upon a wheel that spins while the potter manipulates the shape, allowing for an even distribution of the clay. This wheel was often referred to as the thrower’s wheel or potter’s wheel. This technique is used for vessels such as bowls, pots, or other circular objects. The invention of the wheel allowed for more pots to be made in a fraction of the previous time. Before the wheel was discovered, hand building and other techniques were used to manipulate and distribute clay. Clay was pinched, rolled, and pressed to form pots.

Larger pots were created by pressing and scraping together coils or clay rings. Pots were also molded from placing the clay over or inside existing objects such as baskets and or gourds. Pots could also be formed by pinching out clay from large lumps that were found. Once the object is in its correct form, it may be decorated. Incising, scraffito, and color can be added at this time. Afterward, it is left to dry and then plunged into intense heat (a process known as firing). In order for the clay to harden into a durable and hardwearing object, it must be subjected to temperatures above 600°C. Some clay is more resilient to heat and therefore must remain in higher temperatures or longer periods of time. One technique of adding color to clay is the use of chemical reactions caused by heat and metals or minerals such as: cobalt to produce blue, manganese for purple, antimony for yellow, and iron for brick red. Other types of clay may not be able to withstand such intense heat, and therefore need to be covered by a glaze. Glazing is used to create watertight products. Glazes are used for color and design and provide a glossy finish that is easier to clean.

As archaeologists continue to uncover and find new ancient sites of past civilizations, they continue to discover more information and traces of the technology that were used during that time, such as pottery. Clay is thought to have been developed independently by various cultures throughout history. The history of pottery begins with the use of clay in prehistoric times around the Indus Valley and Mesopotamia. Pottery may not have been the primary use of clay. Clay was used in relation to magic and religion. Clay figures were created in shapes of humans and animals. These figures symbolized and represented different aspects within a culture. Certain sculpted figures were believed to facilitate the fertility of women. It is also suggested that these clay items could have been used for trade. The earliest forms of pottery were found from Anatolia. Cave dwellers were associated with this society around the Mesolithic period of 6500 B.C. Most of the pottery that was produced was of symbolic figurines, simplistic in design and decoration, and useful and functional objects. Early representation of pottery appears to be underdeveloped due to the lower temperatures used in the firing process. This caused the finished product to be porous and fragile.

Areas within the Far East, such as Korea, Indo-China, and Japan, have been greatly influenced by China and the changes that took place within China during the archaic period. Chinese techniques and pottery designs were integrated into neighboring cultures and societies. They developed high temperature kilnfiring techniques. They also created stoneware with high-quality glazes that would later be used in a major step toward the development of porcelain. Eventually they developed white, translucent porcelains superior to those already invented. By the 18th century, with the increase of international trade, Chinese pottery and porcelain were often shaped and decorated to fit the needs of other societies (for example, European populations). The Far East brought significant progress and advancements in the techniques used on pottery and ceramics. These developments and refinements elevated pottery to the level of an art form.

Islamic artisans applied many of the pottery techniques used by Near Eastern potters, such as the production of glazed quartz fritwares and alkaline-based pottery. Arabian mosques and other structures were decorated and built using stucco, colorful mosaics, sculptures, and paintings. These were created with the aid of artists from Syria, Egypt, Iran, and Mesopotamia. There are three main periods that constitute the history of Islamic pottery: the early period, 9th and 11th centuries, which produced T’ang white porcelains and stonewares; the medieval period, 12th to 14th centuries, with its concentration on Sung white wares; and the later period, 15th to 19th centuries, known for the blue and white wares of Ming China.

Lead-glaze was quite popular in the production of pottery and ceramics in Europe. Near the end of the 18th century, lead had proven to be quite harmful to health; therefore, its use and production was mostly associated with peasants. Tin-glazed pottery became popular in Europe. It had previously been produced in the ancient Near East and established in Mesopotamia in the 9th century. Tin-glazed pottery gave way to more artistic possibilities due to its dense white surface that allowed the artist to paint more freely upon its surface.

Pottery and the Industrial Age

This period represents a stage where the art and production of ceramics became more complex. The Industrial Revolution brought great influence over Britain’s style of pottery. Transfer-printed pottery had begun with pictorial images. There was interest in the Early Victorian style of printed ware and cream wares. Emphasis soon shifted toward the use of scenes (for example, rustic, fantasy) to decorate pottery in the 1830s. Although this trend diminished in the third quarter of the century, decorating pottery with floral designs continued. By the mid-19th century, the production and manufacturing of jugs became popular in England, followed by teapots. Naturalistic scenes began to appear at this time. In France, the development of salt-glazed stoneware began to produce printed patterns. Due to the discovery of color glazes and new technologies, the decorative arts took precedence over sculpture and painting during the early industrial revolution. Classical and Renaissance styles emerged by the mid-19th century.

Pottery in the Modern Day

Heightened interest in the artistic aspect of pottery and ceramics is the result of changes to the process of pottery making, such as heating pottery in a stable environment and new glazing technologies. A variety of objects have been created from pottery and ceramics by manipulating shapes and colors. Potterymaking and ceramics have been more functional, (e.g., wall tiles for kitchens and bathrooms, sculptures, vases, and everyday items, all expressed in many styles). Ceramic painting and graphics became a focus of the Pop-art movement in the United States in 1960s, particularly with artists Andy Warhol and Robert Indiana. The ancient art of pottery continues to have a profound impact on cultures, inspiring each generation of artists.