This sample Maya Essay is published for informational purposes only. Free essays and research papers, are not written by our writers, they are contributed by users, so we are not responsible for the content of this free sample paper. If you want to buy a high quality essay at affordable price please use our custom essay writing service.

Since ancient times, Mayan peoples have inhabited a region that included the easternmost states of Mexico, Belize, and Guatemala together with the western portions of El Salvador and Honduras. There are only a few parts of the world today where language and culture so closely coincide that a line drawn around the Maya-speaking peoples contains all of the archaeological sites and hieroglyphic texts assigned to ancient Mayan civilization.

Linguists have divided the 31 Mayan languages spoken today into three major subgroups: Huastecan, Yucatecan (Yucatec, Lacondon, Itza, and Mopan), and Southern Mayan (Greater Quichean, Mamean, Kanjobalan, and Tzeltalan-Cholan). Each of these languages shares a common Proto-Mayan ancestor that was spoken in about 2000 BC in the highlands of Guatemala and Chiapas. It is through research with present-day speakers of Mayan languages that many of the new decipherments in hieroglyphic writing have been made possible. 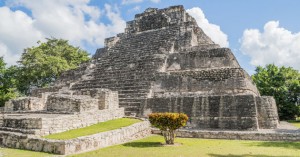 While the Maya existed as a people for over 2 millennia, they developed a remarkably complex civilization over the span of 6-1/2 centuries (CE 250 to 900), in the rain forest of southern Yucatan and northern Guatemala. They built magnificent cities of stone pyramids, temples, and palaces, produced sculpture and paintings of remarkable aesthetic quality, and screen-fold books on paper. Reaching intellectual and artistic heights, which no other peoples in the New World could match at the time, they carved hieroglyphic inscriptions on monuments and used a writing system that has now been largely deciphered. They created a mathematical notation system more sophisticated than any of their European contemporaries, incorporating place notation and the concept of zero. They counted the passage of time in hundreds of thousands of years and developed a number of calendrical systems. At the center was a sacred calendar of 260 days composed of cycles of 13 numbered days and 20 named days. In addition, they had the haab, which was 360 days long plus 5 concluding, unlucky days. Another calendar was the katun, which was a cycle of 20 tuns, each consisting of 360 days. They also used a Venus calendar (584 days), a half-year lunar calendar, and other cycles. These calendars made the Mayas the most accurate reckoners of time before the modern period. All the days of these calendars were recorded in astronomical almanacs that dictated religious ceremony.

These intellectual accomplishments were what made the “Mayan Classic period” into a kind of golden age during which the Maya, living in over 90 cities, were the only people in the Americas who used a phonetic writing system. Furthermore, they were the only civilization in the New World with chronological records going back to the third century AD. Many advances have been made in hieroglyphic decipherment, which has changed the view of the intellectual culture of the ancient Maya and modified our understanding of Classic Maya political systems. It has recently become clear that not all Mayan polities were equal. The kings of some lesser states were said to be “owned” by the rulers of more powerful states. While city-states such as Palenque and Copan exercised political control over some nearby areas, there were two superpowers, Tikal and Calakmul, that dominated the entire Yucatán peninsula during the Classic period.

The Mayan culture of this Classic period was characterized by hierarchal socioreligious institutions organized on both political and territorial bases. These complex institutions were mediated by monumental civic-ceremonial centers that concentrated royal authority, social stratification, and complex markets. Mayan agriculture was based on slash-and-burn farming, which required that a field be left fallow for 7 to 10 years after only 2 to 5 years of cultivation. Fixed raised fields and terraced hillsides were also used in appropriate areas. While the Mayan diet varied, depending on the local geography, maize was the primary staple, as it is today. Made nutritionally complete with the addition of lime, the kernels are boiled, ground on a metate with a mano, and formed by hand into flat tortillas. These are cooked on a griddle supported on three stones. Chili peppers, beans, and squash are also grown in the family farm plot, or milpa, together with the maize, maximizing each crop’s requirements for nutrients, sun, shade, and growing surface.

The Mayas enter world history with the appearance and spread of certain architectural styles. Limestone structures faced with lime stucco were the trademark of Mayan architecture. They also developed unique building innovations, including the corbelled arch, achieved by stepping each successive block, from opposite sides, closer to the center, capped at the peak. Tombs were enclosed within or buried beneath buildings. New temples were constructed over existing structures. Roof combs towered above many structures, providing a platform base for stucco sculpture. In addition to temples, most Mayan sites had multiroomed structures that served as royal palaces as well as centers for governmental affairs. Historically significant events, such as accessions, the capture or sacrifice of royal victims, deaths of kings, queens, and nobles, and the completion of 20-year katun cycles were recorded on stone stelae and tablets.

In Maya cities the ruling and noble class lived at the center, while most of the population resided in small farming villages at the periphery. Mayan nobility worshipped a complex pantheon of deities and other spiritual beings. Rulers were believed to be descendants of the gods, and their blood was the ideal sacrifice, either through personal bloodletting or the sacrifice of royal captives. The Mayan vision of the universe was divided into multiple levels, above and below the earth, positioned within the four directions. After death, the soul went to the underworld, or Xibalba, a place of fright where sinister gods tested and tricked their unfortunate visitors, but some souls escaped and rose as stars.

The dating of ancient Mayan civilization rests on the stratification of pottery, radiocarbon dating, native historical traditions passed on by postconquest writers, and the correlation of the Mayan and Gregorian calendars. The Maya Long Count, which is a daily calendar that has run from a point in the mythical past, began to be inscribed in AD. For reasons that we still do not well understand, the Mayas abandoned their cities around AD 900. There is evidence for invasion from the outside, and it is also possible that economic and environmental difficulties led them to abandon the cities. The greatest change seems to be the disappearance of most of the nobles. With this disappearance, the Mayas stopped building monumental cities, but the peasants continued to use the land on which they stood.

During the Postclassic, lasting from AD 900 to the Spanish Conquest, political power was wielded by councils of nobles rather than concentrated in the hands of kings who were no longer celebrated in monumental inscriptions. Writing, which was now confined largely to books, saw an increase in the use of phonetic signs. Among the richest documentary sources from the colonial period are the katun prophecies of Yucatán, contained in the books of Chilam Balam, or “The Jaguar Priest.” They contain calendrical, astronomical, divinatory, mythological, historical, and medical information. Each book was named for its place of origin: Chilam Balam of Chan Cah, of Chumayel, Ixil, Mani, Kana, Tekax, Tizimin, and Tusik. The Chilam Balam of Nah, however, was named for the Nah brothers, from the town of Teabo, who signed the document. The history these books contain is based upon the Short Count, a cycle of 13 katuns (13 × 7,200 days, or approximately 246 years) named for the Ajaw date on which it ended. Thus, for example, in Katun 13 Ajaw (AD 1262–1283), the Itza Maya founded a new city, Mayapan, which was populated by provincial rulers and their families. This ensured their dominion over most of the city states on the Yucatán Peninsula. At about the same time, the K’iche’ Maya established a large kingdom in the Guatemalan highlands.

The best early Spanish account of the Maya was written by Diego de Landa, who arrived in Yucatán in 1549. While he produced a long descriptive treatise about Mayan culture in Yucatán, he was also responsible for burning a large number of Mayan books because “they contained nothing but superstition and falsehoods of the devil.” Thus he destroyed much valuable ancient knowledge. Other important cultural and historical information survived elsewhere. The Popol Vuh, a manuscript written shortly after the conquest by the K’iche’Maya in Guatemala, gives the mythology and history of this group. The mythic cycle tells of hero twins who overcome earthly monsters and the lords of the underworld, making the world safe for human beings. They also established the ceremonial pattern for human birth, marriage, hunting, agriculture, and death.

The resilience of the living descendants of the ancient Mayas in resisting invasion, disease, exploitation, and repression is remarkable. Guatemala, which has the largest segment of the Mayan population (4 million), underwent a civil war during the 1980s. Guerrilla takeovers of hamlets triggered massive levels of state violence, during which the government engaged in ethnocide, if not genocide, against the Mayan population. They survived this purge and went on to organize themselves nationally in order to advocate for bilingual education. The Academia de las Lenguas Maya de Guatemala (ALMG) was founded, and Mayas, who were also trained as linguists, voted in new alphabets for writing their languages. Their ongoing activities include advocating for the use of these alphabets, encouraging ancient religious customs, the continued use of the ancient calendar, and the bar-and-dot numerical system. By so doing they are reinforcing their conceptual world, their ethnic identity, and their own time. The Maya have survived and will continue to survive into the foreseeable future.