This sample Machu Picchu Essay is published for informational purposes only. Free essays and research papers, are not written by our writers, they are contributed by users, so we are not responsible for the content of this free sample paper. If you want to buy a high quality essay at affordable price please use our custom essay writing service.

The pre-Columbian empire and state system of the Incas of South America created Machu Picchu during the mid-15th century as a royal Incan estate. Machu Picchu, a Quechua Indian term translated as “old or ancient” peak, is located just 50 miles northwest of Cuzco, Peru. It sits on the eastern side of an Andes mountain peak 8,000 feet above sea level overlooking the Urubamba River valley. Farther to the east extends the tropical rain forest. To the west, across more mountainous peaks, lies the Pacific coast. The city size fortress was abandoned shortly after the time of the Inca Empire collapse in 1540 and laid in ruins when Hiram Bingham, a Hawaii-born Yale University professor, rediscovered it in 1911 during his search for the Inca city of Vilcabamba. Bingham’s landscape and architectural photographs supplemented his many field notes, providing hypotheses for field expeditions to follow.

As archaeologists recover the features of Machu Picchu, they debate its complex functions. It is thought to be the country estate of Inca leader Pachacuti, regarded as the greatest Inca ruler. The roads and pathways that linked Machu Picchu to Cuzco suggest that royalty used it as a retreat from bustling Cuzco nestled in the mountains below. For security, there was only one main entrance to the strategic mountaintop site. On the path to Machu Picchu, the Incas developed a drawbridge made of wooden planks or logs placed over a gap on the narrow orchid-lined footpath. It could be removed for protection from possible invaders. 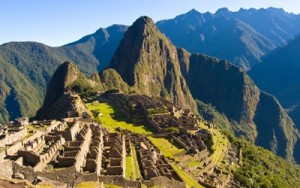 Machu Picchu is known for its highly complex and sophisticated architecture. Most of the urban structure was constructed of granite hauled great distances with conscripted manual labor using simple levers. The stones were carved to fit so well that it is said that a knife or piece of paper could not pass between the stones at any point. An example of Inca stonework is found in the cylindrical Tower of the Sun that houses the Royal Tomb. The Incas applied their knowledge of gravity, stonecutting, and natural springs to create various stone canals, gutters, and storm drainage systems for water diversion. Their expertise in stonework and hydrology enabled them to create 16 fountains that relied on the groundwater of the mountains to supply the private bathrooms and kitchen of the royal quarters. Excavations reveal bronze weapons and stone tools. Archaeologists say that there are still more mysteries to uncover in Machu Picchu.

Machu Picchu has three main sectors: agricultural, religious, and urban residential. The religious sector features the Intihuatana shrine to the sun god Inti. It is a square structure, with its corners pointing in the four cardinal directions of the earth. Machu Picchu is situated in the midst of significant mountain sites, leading many to speculate on its religious significance. The Temple of the Three Windows, which is trapezoidal in shape, and the Temple of the Condor, in which the Incas carved a stone head in front of two large granite rocks that resembled condor wings, are significant architectural accomplishments. The agricultural sector incorporated the high terraces on the mountain’s edge for planting crops such as potatoes and maize. The urban sector was made up of the main courtyards and grassy areas. Many craftspersons lived and worked there, serving the royal family. Houses were usually arranged in small groups. They were constructed of stone, and roofs were woven with thatch.

Machu Picchu attracts 1,500 international visitors per day. The tourist traffic, landslides, and soil erosion threaten the ruins. It was placed on the UNESCO list of endangered World Heritage sites in 2003.