This sample Iron Age Essay is published for informational purposes only. Free essays and research papers, are not written by our writers, they are contributed by users, so we are not responsible for the content of this free sample paper. If you want to buy a high quality essay at affordable price please use our custom essay writing service.

The Iron Age is the final period of European prehistory. The beginning of the European Iron Age is conventionally defined as the date when iron replaced bronze for the manufacture of weapons and tools in the early 1st millennium BCE. In many parts of Central and Western Europe, the Iron Age ends when these regions are incorporated into the Roman Empire in the 1st century BCE and the 1st century CE. In the regions that were never conquered by the Romans, such as Germany, Scandinavia, and Poland, the period from 1 CE through 400 CE is termed the “Roman Iron Age.” In Scandinavia, the period from 400 to 800 CE is referred to as the “Germanic Iron Age,” and the Iron Age ends with the beginning of the Viking period around 800 CE. For most of Central and Western Europe, however, the Iron Age begins around 800 BCE and ends around 1 BCE. Since the later 19th century, the European Iron Age has been divided into an early period known as the Hallstatt Period (ca. 800–480 BCE) and a later period known as the La Tene Period (ca. 480–1 BCE). The Iron Age is important archaeologically because it is the period in which the earliest towns and cities appear in Europe north of the Alps. 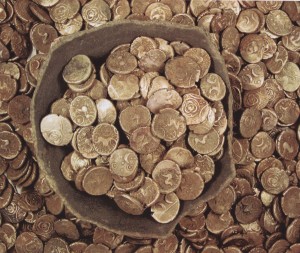 While the copper and tin ores that were needed to produce bronze were derived from a small number of ore sources, iron ore was widespread throughout Europe. The ubiquity of iron ores may have encouraged the replacement of bronze with iron. Iron objects do not become common in Greece until about 1000 BCE. Iron objects appear throughout Central Europe at about 800 BCE. Although a small number of small iron objects appear in Late Bronze Age contexts in Central and Eastern Europe, these objects may have been produced as a by-product of bronze working. Iron objects appear at a somewhat later date in Northern and Western Europe. Iron working appears in Ireland around 700 BCE and in Scandinavia around 500 BCE. Since iron-making technology was widespread in the eastern Mediterranean by about 1200 BCE, it is likely that iron technology spread through Europe as a result of trade and technology transfer.

Archaeological evidence for iron production includes furnaces, forges, slag, iron-working tools, and finished objects. A small number of iron production sites have been excavated in Europe. These sites indicate that smelting, the separation of iron from its ores, and smithing took place in the same locations. Unlike bronze, which was worked by casting in antiquity, ancient iron was worked by forging. In the West, cast iron did not become widespread until the Industrial Revolution. To work the solid iron, the smith reheated it in a forge and then hammered it to remove any remaining slag and to shape the iron into its final form. The iron that was produced in this way was relatively pure and soft. The addition of organic carbon to produce a harder material was difficult to control. Too much carbon produces a brittle steel; not enough produces a soft iron that makes an inferior tool. Early European iron was produced on a relatively small scale and used primarily for weapons and funerary goods.

Iron production changed dramatically in the Late Iron Age. At about 200 BCE, large urban settlements known as oppida (see below) appeared in many parts of Europe. Many of these settlements appear to have been engaged in large-scale iron production. For example, the oppidum of Kelheim, in Bavaria, has produced evidence for the mining, smelting, and forging of iron on an industrial scale. Much of this iron may have been traded to the Roman Empire. By the Late Iron Age, iron was used for a wide variety of tools and weapons, including agricultural implements.

In temperate Europe (Europe north of the Alps), the early Iron Age is known as the Hallstatt period (ca. 800–480 BCE). This period is named after a site in Austria that produced nearly 1,000 human burials. While iron replaced bronze for tool and weapon production during the early Iron Age, there are many continuities in settlement, subsistence, and technology between the Late Bronze Age and the Early Iron Age in Central Europe.

Substantial cultural changes appear in West Central Europe during the later part of the Hallstatt period. Around 600 BCE, Greeks from what today is Anatolia established trading colonies in the Western Mediterranean. The best known of these colonies was Massalia (modern Marseilles). At about the same time, towns, such as the Heuneberg, in southern Germany, make their first appearance in temperate Europe. Mediterranean luxury items, including Greek pottery, wine, and Etruscan bronze vessels appear at these towns, indicating substantial trade and cultural contact between West Central Europe and the Greek colonies in the West. At the Heuneberg itself, the city walls were rebuilt in a Mediterranean style. The traditional timber-and-earth fortifications were replaced with a wall built of clay bricks set on a stone foundation. The dimensions of the clay bricks match those used in contemporary Greek buildings. Rich burial mounds, known as fürstengraber, or “princes’ graves,” also appear at this time. These burials usually include a four-wheeled wagon, as well as Mediterranean luxury items. The largest bronze vessel known from antiquity, the Vix krater, weighing about 208 kg, was recovered from a rich late Hallstatt burial from eastern France. At about 450 BCE, Greek trade patterns changed, and trading towns such as the Heuneberg went out of existence.

Around 480 BCE, a new style of artwork appeared in temperate Europe. The art included decorative elements derived from Greek and Etruscan art, such as the Greek palmette, but these elements were highly stylized. The art is also characterized by stylized plant and animal figures and curvilinear ornaments that were designed using a compass. This style of art is known as La Tene, after the type site in Switzerland where a number of richly decorated iron swords and scabbards were discovered in 1854. By the late 19th century, archaeologists recognized that the La Tene style of metalwork was associated with people the ancient Greek and Roman writers described as “Celts.”

Celts were people who lived in many parts of Central and Western Europe during the first millennium BCE. Most spoke Celtic languages, a family of Indo-European languages that include modern Irish, Scots Gaelic, and Breton, as well as many ancient languages. Although the term Celt was widely used by Greek and Roman authors, there is no evidence to suggest that the Celts ever identified themselves as members of a single ethnic group.

Historical sources, including Julius Caesar’s account of the Roman conquest of Gaul, can provide some important information on Celtic social and political organization. The Greek and Roman sources indicate that Celtic societies were highly stratified, including a warrior elite, specialized priests known as druids, craft workers, and a large pool of agricultural laborers. Many of the poor farmers were clients of the elite classes. The nobles offered protection and support to the agricultural laborers in return for loyalty, especially in times of war.

While historical sources can provide some insights into late Iron Age social life, archaeology has revealed important information on La Tene settlement patterns, subsistence practices, and technological practices. In particular, archaeological research has revealed an important change in settlement patterns beginning around 200 BCE. At that time, a number of large fortified urban settlements appear across a broad swath of Central Europe, from western France to the Hungarian Plain. These settlements, which cover an area of at least 25 to 30 ha, are known as oppida. The oppida are urban enters that seem to have served a number of functions, including centers of long-distance and regional trade, political capitals for individual Celtic tribes, and places of refuge in times of war. Evidence from Colchester in England suggests that some of these sites may also have served as residences for members of the landed nobility. The excavations conducted at several of the major oppida have revealed important details about the ways the oppida were organized.

Kelheim is located in Bavaria, Germany, at the confluence of the Danube and the Altmühl Rivers, a location that is ideal for trade and commerce. The oppidum at Kelheim, which was occupied from the middle of the 2nd to the middle of the 1st century BCE, covered an area of 600 ha, making it one of the largest oppida in Iron Age Europe. Excavations at Kelheim, including those directed by Peter Wells in the late 1980s and early 1990s, have produced enormous quantities of smelting and forging debris, including slag, as well as the bases of furnaces that were used in iron smelting. The archaeological evidence from Kelheim clearly indicates that the site’s inhabitants were engaged in large-scale iron production. Much of this iron may have been exported to the Roman Empire.

Large-scale excavations have also been carried out at the oppidum of Manching, in Bavaria. Manching is located on the Paar River, and the swampy area near the Paar formed part of the site’s defenses. The site was surrounded by a wall 7 km in length, which enclosed an area of about 300 ha. Part of the site was destroyed in the 1930s, when a military airfield was constructed at Manching. A series of excavation campaigns since the 1950s has uncovered about 3% of the Iron Age settlement. The site served as a major center for trade and exchange, and crafts produced at Manching included glass, iron, bronze, and pottery. The center part of the site appears to have been densely occupied; shops, homes, and warehouses lined the streets. The area near the walls was less intensively settled. Many of the oppida east of the Rhine, including Manching and Kelheim, were abandoned in the middle of the 1st century BCE. The reasons for this are not entirely clear, but they remain a focus of research. Regardless of the reasons for their abandonment, the oppida represent the first cities of temperate Europe.