This sample Indus Valley Civilization Essay is published for informational purposes only. Free essays and research papers, are not written by our writers, they are contributed by users, so we are not responsible for the content of this free sample paper. If you want to buy a high quality essay at affordable price please use our custom essay writing service.

In the second half of the third millennium (2500–1900 BC), a civilization flourished in the northwestern sector of the Indian subcontinent. It extended from Afghanistan into portions of Baluchistan in Pakistan, to the Indus Valley and along the tributaries of the Indus River, eastward to the Himalayan foothills and Indo-Gangetic plain, and southward to the Indian states of Gujarat and western Madhya Pradesh. This cultural realm covered some 1 million square kilometers. At the time of the discovery of this advanced urban culture in the early 1920s, as revealed by surface finds of artifacts and ruins of building structures, it was labeled the “Indo-Sumarian civilization.” But as explorations proceeded, it came to be known as the “lndus civilization” or “Indus Valley civilization.” Some archaeologists refer to it as the “Harappan civilization,” since the earliest archaeological excavations took place at the site of Harappa, on the banks of the Ravi River in 1921, under the supervision of Rai Bahadur Daya Sahni (1879–1939). Four years later, the site of Mohenjo-daro, on the Indus River, was excavated under the direction of the British archaeologist John Marshall (1876–1958). Although some 19th-century British explorers had collected surface artifacts at Mohenjo-daro, Harappa, and other sites, it was Marshall who recognized the unique characters of this hitherto unknown unique Bronze Age civilization of South Asia. He was aware that its cultural influence had diffused to Iran, Mesopotamia, and to the Arabian Gulf, as some Indus seals and pottery had been found in these regions, but there were only vague references to the Indus Civilization in Sumarian, Iranian, and Egyptian texts. It is possible that the Mesopotamian and Gulf localities of Dilmun, Magan, and Meluhha mentioned in and 2nd and 3rd millennium BC written records may have referred to important trade centers that Indus merchants reached by coastal sea routes. 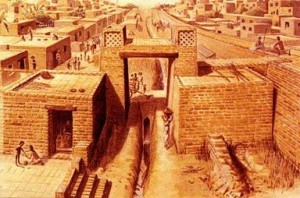 As excavations progressed at Harappa and Mohenjodaro, other Indus sites were discovered in Afghanistan, India, and the northwestern sector of the subcontinent, including the present nation of Pakistan, which gained independence from British colonial control in 1947. Over 1,000 sites dated to the mature Indus phase are known today. Some were towns such as Chanhu-daro, on the lower Indus River and Lothal in Gujarat, while other settlements were large urban centers such as Kalibangan, in Rajasthan, and Dholavira, on Kadir Island, in the Great Rann of Kutch. The socioeconomic basis for these centers included wheat and barley agriculture and pastoralism. Goats, sheep, and cattle were the predominant domesticated animals, but hunting continued to supplement food resources. Although there is regional diversity, the Indus Civilization is distinguished by a carefully regulated system of city planning. Streets are laid in a grid pattern and feature public structures and platforms, houses and courtyards, walls, and platform structures once considered by some archaeologists to be foundations for granaries. There were water-filled baths, tanks, wells, and bathing rooms within residential compounds. Working areas for firing pottery and threshing grain are present. The construction of drains running along the streets testify to the sophisticated level of hydraulic engineering for public sanitation. However, unlike the ancient cities of Egypt, Mesopotamia, and China, the Indus people did not erect monumental structures such as temples and palaces, although gateways and platforms approach grand architectural achievements. Mud and fired bricks were the principal building materials, all made to the same size, as were graduated series of standardized stone weights and measures.

Among other distinctive cultural features were wheel-made and well-fired ceramics, often with characteristic floral and animal designs on urns, pots, dishes, and different types of household wares. Figurines were made of bronze, stone, and terracotta. Bronze was the material for short swords, knives, axes, and spearheads, as well as for utilitarian tools, such as chisels, saws, fishhooks, and sickles. Ornaments were of gold, silver, lapis lazuli, shell, and discoid beads, often shaped from stones imported as far away as the Bay of Cambay. The Indus script carved into steatite or formed as stamps of fired clay record an unknown language that has not been deciphered. It is likely that the script with their accompanying representations of plants and animals did not function as texts, but served as markers of ownership, contracts, and accounts.

Because of the unexpected discovery of the existence of the Indus civilization, it was assumed by some early archaeologists that its origin was abrupt and without any antecedent cultural associations. But later investigations demonstrate that village farming communities and pastoral camps had been thriving in the northwestern sector of the Indian subcontinent as early as 7000 BC. Archaeological evidence of herding of sheep and goats dates to around 10,000 years ago in Afghanistan. Within and along the margins of the Indus realm were a number of cultures dating from 4500 BC to 2300 BC, which are identified by cultural locality names (e.g., Togau, Kechi Beg and Hakra, Amri, Nal, Kulli, and Kot Diji). Each is distinguished by its ceramic forms and paintings and other artifacts, including copper in some of these pre-Indus cultures, along with the implements of a village farming and pastoral way of life. The first stages or phases of the Indus civilization fall within a chronology of 2600 BC to 2500 BC. The mature phase continues for over 600 years (2500–1900 BC), to be followed by posturban cultures identified as Jhukar, Early Pirak, Cemetery H, and other cultural entities that reveal the decline of the Indus civilization but a perpetuation of some of its material cultural elements in adjacent geographical regions.

Funerary customs of the mature Indus phase were of considerable diversity: earth burials in cemeteries with the skeletons in extended or flexed positions, secondary and fractional burials with partial skeletal remains deposited in pots and urns, cremation, and isolated interments of one or a few individuals. Preservation of skeletal and dental remains from the sites of Mohenjo-daro, Harappa, Kalibangan, Chanhudaro, Lothal, Rupar, and at some other Indus sites have allowed biological anthropologists to describe the physical features of the inhabitants of these localities and reconstruct demographic patterns of their populations. Furthermore, data concerning the health status of these earlier peoples can be ascertained by measurements and morphological observations of bones and teeth. Results of these studies by research teams from Pakistan and India and by foreign investigators (principally from the United Kingdom, United States, Germany, and Italy) show that there was a relative degree of genetic heterogeneity among the architects of the Indus civilization. Across the immense geographical regions of their cultural influence, populations had adapted to different environmental conditions as well as responded to various biological stresses imposed by local cultural traditions. In short, there is no “lndus race.” Rather, the range of biological variability observed in skeletal and dental remains confirm that they are “typically” South Asian in their ancestry and not descendents of some exotic hordes of invaders from unknown places of origin elsewhere in Asia.

The question of the ancestral identity of the peoples of the Indus domain is relevant to questions concerning the decline of their mature phase circa 1900 BC. The British archaeologist Mortimer Wheeler (1890–1976) proposed that this civilization collapsed suddenly because of an invasion of Indo- European-speaking conquerors, the Aryans of the Vedic accounts of ancient India. Vedic India marks the period of a second rise of urbanization in the subcontinent almost 1,000 years after the decline of the mature Indus phase. Wheeler sought the evidence for this in the skeletons at Mohenjo-daro, which were not recovered from formal burials, but lay scattered over different parts of the site. Today, we know that the dating of such an invasion, if indeed one had ever occurred, was too late to coincide with the decline of the Indus civilization, and both the archaeological and biological anthropological evidence provide no support for this thesis. Better hypotheses are that there were gradual changes related to socioeconomic and ideological transformations in those cities and villages, which became less important as mercantile and manufacturing centers. It is unlikely that the Indus civilization had formed an empire or a national state, as the symbols of kingship are not present in the archaeological record. Within the broad spectrum of commercial interactions between the Indus Valley and the Mediterranean Sea and covering the lands between Central Asia and the Arabian Gulf were diverse human populations, ecological settings, and languages of which the Indus civilization was one center during the 3rd millennium BC.

New discoveries continue today with the finding of more sites and reanalyzes of earlier hypotheses about the Indus peoples. American scholars active today in the archaeological sphere include Gregory L. Possehl of the University of Pennsylvania, Richard Meadow of Harvard University, Jonathan Mark Kenoyer of the University of Wisconsin, Louis Flam of Lehman College, and Rita Wright of New York University. The biological anthropology studies have been undertaken by John A. Lukacs of the University of Oregon, Nancy C. Lovell of the University of Alberta, Brian E. Hemphill of California State University at Bakersfield, and Kenneth A. A. Kennedy of Cornell University.