This sample Great Wall of China Essay is published for informational purposes only. Free essays and research papers, are not written by our writers, they are contributed by users, so we are not responsible for the content of this free sample paper. If you want to buy a high quality essay at affordable price please use our custom essay writing service.

The Great Wall of China has been described as being like a giant dragon snaking its way across northern China. From east to west it runs across mountains, valleys, and bodies of water for approximately 4,163 miles (6,700 kilometers). Although there are roads that are longer, the Great Wall is the longest structure ever built by humans. It is visible to astronauts from earth orbit.

The Great Wall starts on China’s east coast at Shanhaiguan, which is a town near the city of Qinhuangdao. It ends in western China close to the town of Jiayugun. It was built to defend China from invasions by tribes from Mongolia and Siberia.

Anthropologists include the Great Wall in the study of ancient cultures, or prehistorical human life, because the date and place for the beginning of its construction are unknown. Probably, it was begun at least 2,400 years ago during the Spring, Autumn, or Warring States periods of Chinese history. Successive dynasties built, expanded, or ignored it until around 400 years ago.

At first, parts of the Great Wall were built in different Chinese states. After northern China was unified, parts of the wall were tied together. Later dynasties extended and expanded the wall. 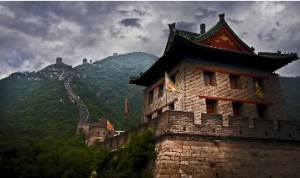 The Great Wall is a testimony to human abilities to build and to wage war. The human cost for building the Great Wall was very high. Men from many families were drafted to work on the wall. Many died during their labors and were buried inside the wall. Today, parts of the Great Wall have been lost to erosion. Some sections have been rebuilt by the current government. The bulk of it was rebuilt and expanded during the Ming Dynasty and is now serving as a major tourist attraction. In 1987 it was listed as a World Heritage site by the United Nations agency, UNESCO.