This sample Copper Age Essay is published for informational purposes only. Free essays and research papers, are not written by our writers, they are contributed by users, so we are not responsible for the content of this free sample paper. If you want to buy a high quality essay at affordable price please use our custom essay writing service.

The Copper Age, or Chalcolithic time period, generally refers to circa 5000 BCE to 2000 BCE. This typology was initiated by Dane Christian Jurgensen Thomsen in 1807 as a three-age system of classifying human prehistory based on toolmaking technologies (i.e., Stone Age, Bronze Age, and Iron Age). These categories were later refined by John Lubbock in 1865. The term Chalcolithic (“copper-stone”) is derived from the Greek chalcos (copper) and lithos (stone). The Chalcolithic time period is significant in Old World contexts because it coincides with the beginnings of craft specialization, development of agriculture, long-distance trade, and increased sociopolitical complexity.

The Copper Age in Central and Northern Europe overlaps heavily with the Middle and Late Neolithic periods. The Middle Neolithic/Copper Age I (4500–4200 BC) is best illustrated by the Tiszapolgar Culture. The first farmers of the Northern European plains, of the Funnel Beaker Culture (4200–2800 BC), settled in southern Norway to the Czech/Austrian border, and from the Netherlands to Ukraine during the Late Neolithic/Copper Age II (4200–3750 BC). Evidence for the first wheeled carts occur in Germany and Poland during this time. Northern Europe developed agriculture, plow tools, copper tools, and monumental architecture. The Corded Ware/Single Grave Culture (2800–1850 BC) continued in the same areas and expanded eastward. Scholars suggest the development of Indo-European language groups at this time. The Corded Ware Culture was followed by the Bell Beaker Interaction Sphere, based on bell-shaped pots found from the Middle Danube to the Iberian Peninsula and from Ireland, Great Britain, and Denmark to Sicily and North Africa. Depending on the location, this sphere may be considered part of the Late Copper Age or Early Bronze Age (2900–1700 BC).

The Chalcolithic in the Levant dates between the late 5th and early 4th millennia BC (5000–3500 BC). The chronology and periodization of the Chalcholithic in the southern Levant has long been a contentious topic, resulting in significant overlap between Copper Age material and the Early Bronze Age material. Key to understanding the Chalcolithic in the Levant is the shift in settlement patterns, simultaneously illustrating an increase in sociocomplexity and metallurgy. Examples of sites with Chalcolithic material include Arad, Byblos, Ghassul, Gilath, Jawa, Khirbet Querin (North), Tell Teo, and Tell Um Hammad. 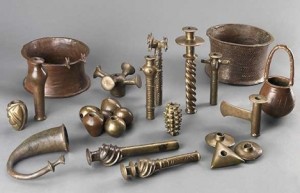 The Chalcolithic in Central Asia exhibits the first uses of copper and indications of organized agriculture. In western Central Asia, the typological phase Anau IA (late 6th–early 5th millennia BC) illustrates the use of copper tools at Chakmakli-depe and Mondjukli-depe. Subsequently, the Namazga sequences at these sites define the chronology of the developed Chalcolithic period (4th–2nd millennia BC). This period in western Turkestan represents the first organized agricultural villages in Central Asia, and during the Namazga Chalcolithic, craft (metal and ceramic) specialization became an economic factor linking Central Asia to the Near East and South Asia.Unlike the Namazga sites, the Keltiminar groups of Khoresmia developed separately due to the barrier of the Kyzl Kum desert. Autochthonous developments are also seen in societies north of the Caspian Sea, along the Volga and Ural rivers, such as Tripolye and Sredny Stog (ca. 4000–3500 BC), which represent sedentary communities employing mixed economies of hunting, fishing, animal domestication, and limited agriculture. Similar to those communities, the Botai and Tersek (Ural Mountains and Tobol River in Kazakhstan) show local affiliations and interaction.

In China, the Chalcolithic period (3000–2000 BC) is best represented by three main cultures: Qijia culture, with settlements following the upper course of the Yellow River; Longshan culture, distributed along the middle and lower Yellow River; and Liangzhu culture, with the settlements clustering around Lake Tai.Whereas in the former two cultures, brass developed with the use of copper, the Liangzhu culture is known for jade artifact production. The Chalcolithic levels mark the beginning of urbanism and a move toward extensive trade networks in East Asia.

The Chalcolithic in South Asia is divided into five main regions. The Indus Civilization sites (such as Mohen-jo- Daro and Harappa) have Chalcolithic levels that demonstrate the use of copper/bronze, intensification of agriculture, and the development of trade networks. Other Chalcolithic settlements illustrate a range of subsistence strategies, from hunting/gathering to agropastoralism, at sites in northwest India, northeast India, Saurashtra, and Central India (Deccan and Vidarbha). The Chalcolithic period appears to be absent in the southern parts of India, where the chronology leaps from the Neolithic to the Iron Age. In northwest India, cultural areas such as the Ganeshwar- Jodhpura Cultural Complex and the Ahar-Banas complex existed during the 3rd to 2nd millennia BC. At sites such as Bagor, evidence exists for settled agricultural communities alongside more mobile populations, where copper tools joined the continued use of microlithic tools. In Madhya Pradesh, there are over 40 Chalcolithic sites (late 3rd millennia). Northeast Chalcolithic excavated sites include Golbai Sasan, Randu Rajar Dhibi, and Chirand. Over 70 Chalcolithic sites have been identified in West Bengal. The sites in Saurashtra, considered Sorath Harappan, include sites such as Rojdi and Lothal. These sites share traits with the Indus sites, although they carry distinct ceramic styles. The Deccan Chalcolithic is divided into four periods: Savalda (2000–1800 BC), Late Harappan (1800–1600 BC), Malwa (1600–1400 BC), and Jorwe (1400–1000 BC). These are considered early farming communities with hunters and gatherers living alongside one another. In addition, there are a large number of copper hoards that are found throughout Northern India and across the Deccan.Usually found apart from settlements, these hoards are associated with a particular type of ceramic, dating to approximately 2650 BC to 1180 BC.

The Chalcolithic period indexes the first widespread use of metal by human society, replacing the exclusive use of stone tools. In many parts of the world, this technological advancement marks the transition from a pastoral society to a more agricultural and urban one. This change simultaneously allows for a significant increase in interaction between various regions. Illustrations of the Chalcolithic may be found worldwide, such as in Africa (Egypt and the Eastern Coast), Asia Minor, Mesopotamia, and the Mediterranean, to name a few.