This sample Chichen Itza Essay is published for informational purposes only. Free essays and research papers, are not written by our writers, they are contributed by users, so we are not responsible for the content of this free sample paper. If you want to buy a high quality essay at affordable price please use our custom essay writing service.

Chichen Itza emerged as a principal political player following the Late and Terminal Classic “collapse” of Maya polities in the southern and central lowlands. Situated in the northern lowlands of Yucatan, this center dominated as a regional power until the end of the Early Postclassic period (ca. AD 1200). Key to Chichen Itza’s success were its military accomplishments, blending of old and new cultural traditions, and emphasis on commercial transactions that extended beyond regional borders. Consequently, inhabitants of Chichen Itza are characterized by their cosmopolitan attitudes manifested in art and architecture, religion, and politics.

Details about the earliest occupation of Chichen Itza are poorly understood. We do know that in the site’s southern section, Terminal Classic inhabitants (ca. AD 800–900), the Yucatec Maya, constructed Puuc-style buildings resembling those erected at Uxmal. One striking example is the Caracol, a spherical building set atop an earlier-constructed rectangular platform. A spiral staircase inside of the Caracol accesses an upper-level observatory. The building’s unique design and orientation are believed to have facilitated viewing of astronomical events like planetary movements.

By the end of the 9th century, the Itza, a Putun Maya group from Tabasco in Mexico, had established a formidable presence at Chichen Itza. Consequently, this Mexicanized-Maya group instigated dramatic cultural change through hybridization. The architecture of this later period at the site is particularly innovative in this respect and references Toltec styles. Buildings concentrated in the site’s northern section, like the Temple of the Warriors and the Castillo, displayed colonnades, images of warriors and feathered serpents, and chacmools (three-dimensional sculptures of reclining figures). 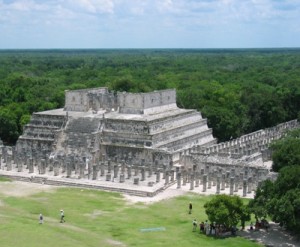 Aside from art and architectural styles, cultural hybridization also affected political organization at Chichen Itza. Unlike Classic dynastic rulership, political authority in the Early Postclassic period (ca. AD 900–1200) was delegated to a group of elites who ruled jointly. Increased interregional contacts with groups throughout Mexico also occurred during this period, as a consequence of commercial and military endeavors.

By the end of the Early Postclassic period, Chichen Itza’s power had waned. There is evidence that the site had been sacked, quite possibly by inhabitants of Mayapan, a center that filled the political void after Chichen Itza’s demise. The city was abandoned by the beginning of the Late Postclassic period (ca. 1250 AD), though pilgrims continued to visit the Sacred Cenote.

In fact, visitation to cenotes, or natural limestone sinkholes, remains the one constant throughout Chichen Itza’s history. Chichen Itza translates into “opening of the wells of the Itza.” The presence of two at the site, the Xtoloc Cenote and Sacred Cenote, may have attracted early occupants. Cenotes offered a stable source of water and also functioned as sacred conduits to the underworld. Modern dredging of the Sacred Cenote has yielded human sacrifices and 30,000 objects, including gold artifacts from Panama and Costa Rica, copper from Mexico, and jade and obsidian from the Guatemalan highlands. The tremendous nature of this find underscored the sacred space’s long-standing ceremonial usage.

Even today, Chichen Itza has not lost its pull as a pilgrimage site. Religious obligations have been replaced by the siren songs of scientific inquiry and tourism. Future work at the site may further clarify question marks about chronology, ethnicity, and demography.