This sample Angkor Wat Essay is published for informational purposes only. Free essays and research papers, are not written by our writers, they are contributed by users, so we are not responsible for the content of this free sample paper. If you want to buy a high quality essay at affordable price please use our custom essay writing service.

King Jayavarman II founded Angkor, the capital of the Khmer Empire, in the 9th century AD in northeastern Cambodia. Angkor reached its peak of development in the 12th century under the rule of Kings Suryavarman II and Jayavarman VII. Angkor Wat is a temple dedicated to the Hindu god Vishnu and is the most well-known building in the complex despite the fact that it is only 1 of approximately 100 temples spread throughout 40 miles of jungle.

The city of Angkor was planned and constructed to serve as both an administrative and religious center. Angkor was a symbolic model of the universe from traditional Hindu cosmology. The city was oriented around a central pyramid temple. The outer walls of the temple represent the mountains that were believed to circle the edge of the world. A complicated system of canals, moats, and reservoirs, while symbolizing the waters in the cosmos, also conveniently provided water for irrigation. 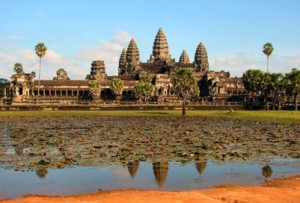 Kings who worshipped different gods built many of the greatest temples at Angkor. Angkor Wat was built at the direction of King Suryavarman II in the 12th century as a funerary temple. Not only was it a place to worship Vishnu, but also upon his death, his ashes were to be interred there, solidifying his identity with Vishnu.

Angkor Wat is easily recognizable by its five central shrines. The tallest tower in the center rises 699 feet above the jungle. The towers are believed to represent the five peaks of Mount Meru—the Home of the Gods and center of the Hindu universe. The main entrance faces West, the direction associated with Vishnu. Earlier temples all faced East, associating with Siva. Three galleries and a moat surround the center shrines of Angkor Wat. It appears that every inch of the temple is carved. The outer gallery walls contain the longest continuous bas-relief in the world. It illustrates stories from Hindu mythology, including scenes from both the Mahabharata and the Ramayana, and scenes relating to Vishnu. In many other panels, King Suryavarman II is shown holding court.

The compound of Angkor Wat measures well over 4,000 feet on each side and is surrounded by a vast 590-foot-wide moat. The existence of the moat is the reason this particular temple has been well preserved. It helped to keep the jungle growth from encroaching on the structure. A long causeway leads to the enormous entrance gate. The central chamber believed to be King Suryavarman II’s burial chamber is carved with many apsaras, mythical, heavenly dancers who entertain the gods and are a reward for kings who die bravely.

In the late 13th century, Angkor was still a large, thriving metropolis, but the frenzy of ornate, elaborate construction had come to an end. Theravada Buddhism was on the rise, and a restrained, simpler religious orientation became the norm. Meanwhile, off to the West, the Thai empire emerged as a major power in the region. The Thais encroached on the Cambodian kingdom by moving their capital to Ayudhya, in close proximity to Angkor. In 1389, the Thais attacked and claimed the city. The final abandonment of Angkor occurred in 1431, when the city was deserted and the capital was moved eastward to the area of the current capital, Phnom Penh.

During the four centuries between the demise of the ancient city and the late 19th century, most of the interest in Angkor was focused on Angkor Wat. Virtually all the other temples were abandoned to the jungle, but Theravada Buddhist monks claimed and maintained the temple for their own use.

In the 19th century, early European visitors to Cambodia were interested in the stories of a “lost city” deep in the jungle. When the French colonial regime was established in 1863, the whole area provoked interest in scholars. Intensive research and reconstruction followed well into the 20th century. Due to political and military upheavals in Cambodia in the late 20th century, there was some damage and thievery among Angkor temples. The greatest structural damage, however, was caused by neglect. Without constant maintenance, the structures were once again engulfed by jungle vegetation. In 1992, UNESCO (United Nations Educational, Scientific, and Cultural Organization) designated the Angkor complex a World Heritage Site, and added it to the List of World Heritage in Danger. This recognition has initiated international preservation efforts. Hopefully these fascinating cultural remnants will remain intact for future generations to appreciate.